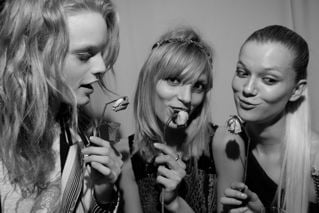 Sal Morale (who appears in the issue with girlfriend Maryna Linchuk) DJed the fete in an old Paris apartment, where fellow featured subjects like Heidi Mount, Karlie Kloss, Alana Zimmer, and Kasia Struss joined him.  The issue boasts an abundance of couture — “It is rare to get so many couture clothes in a magazine," Rubik told WWD — and comes in a limited-edition English version (2,000 copies) and a larger print run in German (50,000 copies). “It’s an Austrian magazine so it was important to keep a link between the first issue and Austria,” said Rubik, explaining fashion editorials inspired by artists Egon Schiele (photographed by Victor Demarchelier) and Gustav Klimt (featuring Eniko Mihalik).

Knezevic and Rubik are already hard at work on their next issue of the quarterly magazine; noted the latter: “One of our contributors will be Julia Restoin-Roitfeld."

[Editor's Note: I contributed to the issue.]