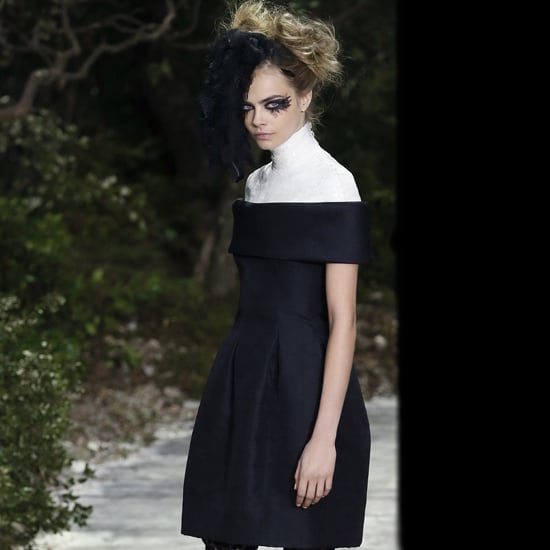 By now, no one should underestimate Karl Lagerfeld's affinity for political statements. He closed the Spring 2013 Chanel Couture show not with just one model in a bridal dress, but with two. And because they held hands as they walked down the runway — or was it an aisle? — with 4-year-old Hudson Kroening dressed as a ring bearer, some critics thought The Kaiser might be announcing his support for French President Francois Hollande's controversial proposal to legalize gay marriage.

"I don't even understand the debate," Lagerfeld told The Associated Press after the show. "Since 1904 (in France) the church and state have been separate."

But Lagerfeld didn't use the show to make a statement about equality: He also threw his shoulders behind, well, shoulders. Those wedding dresses had bands of feathers set just underneath the models' decolletage to emphasize their shoulders, and nearly every other look in the collection highlighted that part of the body in some way. The first tweed jackets down the runway, for example, had mini-capes attached to them, while others had sleeves accented by peaks of fabric set just below the shoulder. Other dressed exposed the shoulders through sheer pieces of tulle or with strategically place straps.

"The idea is to make the shoulders beautiful," Lagerfeld said in an interview with The New York Times.

But perhaps the biggest statement Lagerfeld made with this show was about nature. Some of the dresses had elaborate floral appliques, intricate beading, or delicate lacework, but none of it was more complex than the full-scale pine forest he constructed as a set underneath the glass dome in Paris's Grand Palais. Critic Nicole Phelps noted that the temporary woodland clearing was complete with birdsong — something Lagerfeld underscored with with the feathered headpieces each model wore down the runway.

Previous Next Start Slideshow
Karl Lagerfeld
Around The Web