Last night's annual ESPY Awards drew a Hollywood crowd — and a bevy of sleek, sexy looks. That's the common denominator in this red carpet crew, where sequins, body-con silhouettes, and cutouts ruled. Zooey Deschanel got glittery and gold in a red, bow-tied Oscar de la Renta sheath, Maria Sharapova flaunted her athletic frame in a sky-blue cutout gown straight from J. Mendel's Resort collection, and Magic Mike's Cody Horn was sleek and sultry in a curve-hugging Cushnie et Ochs number. Speaking of curves — Olivia Munn stepped out in a body-skimming, albeit understated, floor-length dress and Jessica Biel played up the flirty factor in a fit-and-flare Christian Dior mini and Nicholas Kirkwood heels. In every case, celebs were in top form to fete the stars of the sports world. Now we're turning it over to you — who's most fab? 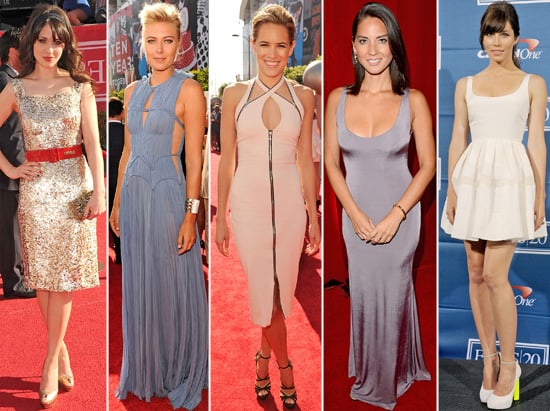