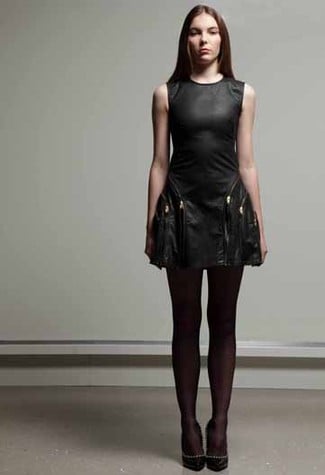 >> Alexander McQueen doesn't plan to show off its full intentions for McQ until February for the Fall 2011 season — when there will be jewelry, bags, and shoes along with the clothes — but it's giving a sneak peek with the Pre-Fall 2011 collection it unveiled today. Now that McQueen has complete control of the brand (which was previously licensed) and a new, devoted creative director — Pina Ferlisi — expect some change.

McQ currently represents about 20 percent of McQueen's business, but Jonathan Akeroyd, the brand's president and CEO, expects it to grow to 35 percent by 2012: “We always felt there was scope to create a brand that was more accessible — and a little more edgy. We’ve got a strong ambition for it.” There will be a push for more accessories and a more casual feel, with prices lowered by 25 percent: think jeans priced at 175 euros ($235), dresses at 200 euros ($270), jackets starting at 300 euros ($405) and printed T-shirts at 70 euros ($95).

E-commerce is expected to launch next year on the McQ website, and in the meantime, a film will debut this week instead of a lookbook, featuring four girls wearing the new Pre-Fall 2011 collection in real-life situations. And "democratic" London and New York Fashion Week events are planned for next Spring, with consumers as well as fashion insiders expected to be involved.

Red Carpet
Zendaya Is 8,000 Years Ahead of Her Time — See Her Futuristic Gown at the Dune Screening
by Chanel Vargas 3 days ago