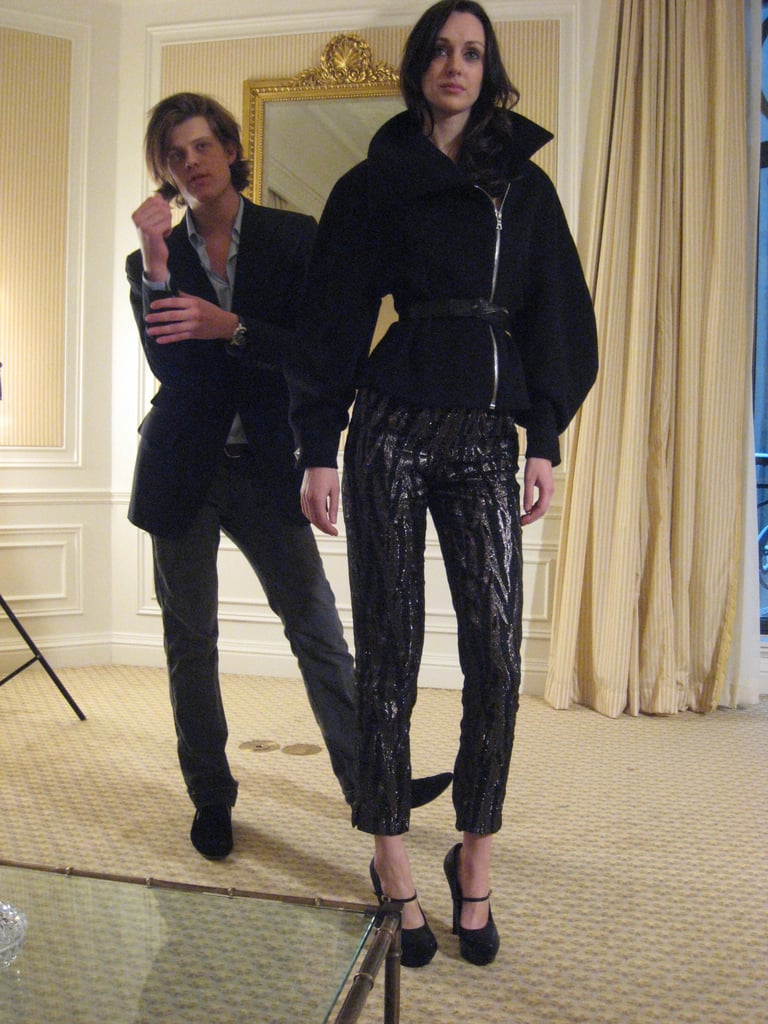 >> All day today, 23-year-old Wes Gordon provided a refuge from the snowstorm in a room on the fifth floor of the St. Regis Hotel. The Atlanta native hosted buyers and editors in a cozy living room of sofas and chairs, where he talked them through his 20-look debut collection. Gordon has quite a pedigree — schooling at Central Saint Martins and internships at Oscar de la Renta and Tom Ford — and is already getting preliminary buzz from Style.com, Vogue, and Harper's Bazaar.

"The collection," he told Vogue, "was inspired by all the beautiful girls I know or wish I knew, like Lauren Bacall. These women exude a modern elegance, wearing exquisitely tailored clothes with a certain twist and edge — not unlike themselves. My goal is to design pieces that combine creativity and fun.”  One lambskin and wool jacket was listed in the show notes with "Ziggy lame" sleeves — dubbed such, Gordon noted, because "Ziggy Stardust" was playing in the background at the time.  The designer is nothing if not exacting: a pink chiffon dress was all hand-tucked, and the collection's buttons were "done by the jeweler down the street" because "nothing should be an afterthought."

Tommy Dorfman
It's Tommy Dorfman's Fashion Week World, and We're All Just Living in It
by Victoria Messina 10/05

Fashion Week
Activist Emily Barker Talks Fashion Runways: "There Should Be More Than 1 Disabled Person in Each Show"
by Sarah Wasilak 9/22

Fashion Designers
These Runway Looks Were Meant to Be Worn by These 7 Celebs — Don't You Agree?
by Shelcy Joseph 9/22