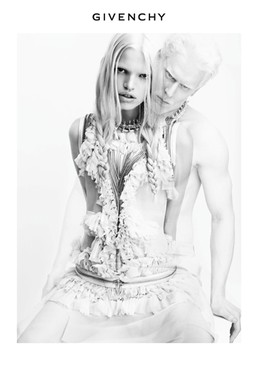 Givenchy's Riccardo Tisci is known for his controversial ads — remember Fall's campaign with transgender model Lea T.? For Spring '11, the designer has hired albino model Stephen Thompson to star in a black-and-white portrait, seen left. "They're very near my world," he said of albino people. Last season's look was very bright, with reds and pinks, while this one is adversely stark. What do you make of it?

Riccardo TisciGivenchyModels
Around The Web

Fashion News
Ella Emhoff Quarantined After the Inauguration, and Now She's Modeling at Fashion Week
by Sarah Wasilak 1 week ago

Fashion News
Lourdes Leon, Madonna's Daughter, Is the New Face of Marc Jacobs in This Colorful Spring Campaign
by Sarah Wasilak 1 week ago