>> After three years of legal volleys, Guess and Gucci finally met in federal court on Wednesday to get the much-delayed trademark trial between them underway.

Gucci sued Guess in 2009, claiming that a number of Guess products mimicked and imitated Gucci's design elements, including a large block letter "G" and red and green stripes. Gucci's lawyers say Guess has knocked off over $200 million worth of Gucci product.

"This case is not about following fashion trends," said Louis Ederer, Gucci's lawyer, to WWD. "It's about a massive, complicated scheme to knock off Gucci's best-known and iconic designs."

Guess's legal team said Gucci's case is "built on a house of cards," pointing out that Gucci only complained to Guess about its products once. Guess's intellectual property experts also stopped the production of a sneaker that they thought looked too similar to one of Gucci's.

It's not often that trademark infringement cases actually go to trial. This one could take up to three weeks to resolve, but it's not the only one the Gucci group has in the works — its sister company Yves Saint Laurent is currently involved in a court battle with shoemaker Christian Louboutin over its trademark red soles.

Below, a side-by-side comparison of the controversial shoes.

Winter Fashion
Glamping, Anyone? The North Face and Gucci Collaborate For a Luxury Outdoor Experience
by Kara Kia 18 hours ago 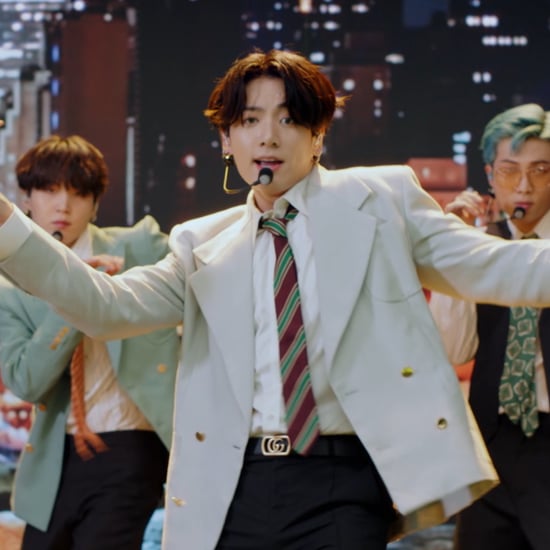 MTV VMAs
The Ties! The Suits! The Gucci Belts! BTS Looked Dapper at the MTV VMAs
by Sarah Wasilak 3 weeks ago