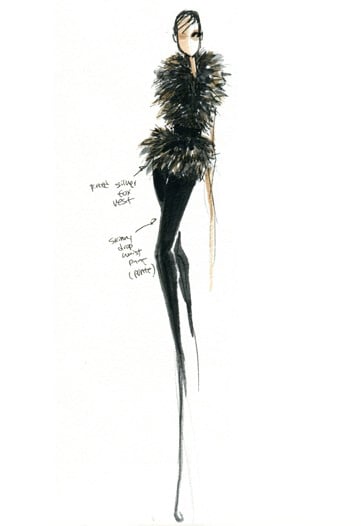 >> Jason Wu has a new, 9,000-square foot office in Manhattan's Garment District, sales of his just-launched Pre-Fall collection are already 45 percent over initial projections, and his new sunglasses collection, priced at $275 a pair, just hit stores. “There are four styles: the Mia, which is very Sixties looking; the Jett, an Eighties, Wayfarer style; the Earhart, my version of the aviator, and the Seberg, which is my take on the cat eye with a metal brow on top," he told WWD. "Jean Seberg has actually been my invisible muse for the longest time.”

The designer already has plans to enter footwear by 2011, but first comes his capsule collection with Tse Cashmere (preliminary sketch below), which will debut during New York Fashion Week on Feb. 16: “The inspiration was about artist Robert Ryman as well as Geoffrey Beene and his controlled femininity . . . I wound up rendering [fox fur] in these loopy, metallic-yarn knits. It’s almost like a thesis. How do you showcase the material in different ways in one collection? This Tse collaboration has really been about expanding my horizons and bringing my aesthetic to a brand that’s very different from my own."

Word is Wu is working with Samantha and Dawn Goldworm, the sisters who created the scent diffused during Rodarte's show last season, for a custom-made scent to diffuse at his own Fall 2010 show next week.

Fashion Designers
What Does a Socially Distanced Runway Show Look Like in 2020? Let Us Show You
by Sarah Wasilak 9/17/20