Gossip Girl Jessica Szohr is known for her disheveled-chic look off camera, but the actress went unusually polished for her appearance at Chris Benz's Fall 2012 show at New York Fashion Week. Up top she wore a navy, schoolboy-style blazer with a black sequined tie-front blouse, which you can re-create by tying a sequined scarf around your neck. Down low, Jessica lightened things up with a pair of tan skinny jeans, which she cuffed at the bottom. But it's her feet that stopped the outfit from veering into too-preppy territory. The pointy leopard booties lend just enough roar factor without being obnoxious, which is just the way leopard should be worn, in doses. Re-create this preppy-cum-wild ensemble at the office, then remove the blazer to reveal a more nighttime feel for after-work sips. 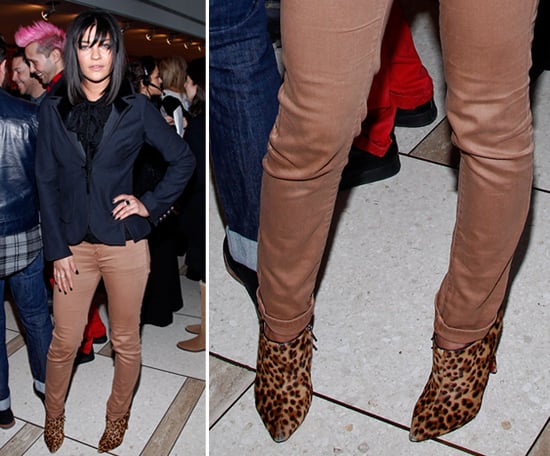 by Tori Crowther 19 minutes ago