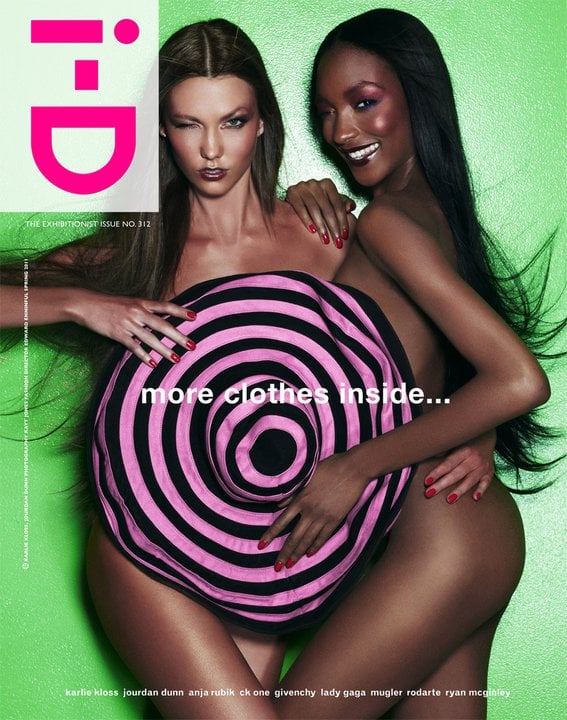 >> Karlie Kloss is growing up: she turned 18 last August, and it seems like she's comfortable showing more skin these days. She stripped down for the cover of i-D's Spring 2011 Exhibitionist Issue alongside her best friend Jourdan Dunn, holding a strategically placed hat, and inside the magazine there's more of the same — modest poses in no clothes or a convenient crop job.

"Jour Jour" and "Kar," as they call each other ("We're too lazy to say each other's full name!" Kloss says) — or "Jourlie," which Dunn explains is what "people call us when we're together," also gave an interview together. Among the things we learned:

They're both serially late: "Our call time [for the i-D shoot] wasn't until 4 pm," Kloss says, "so we spent the day apartment hunting in New York. Then had a bite to eat at a little diner before heading to the shoot. We still ended up being 25 minutes late! Both of us have serious problems being on time…"

Karlie's favorite part of her body: "Karlie is obsessed with her bum," Dunn says. "She loves it."

Jourdan is no longer with the father of her son, who was arrested a year ago: "Last year was a tough year for me. I went through a lot with my personal life but thank goodness my Mum was there for me every step of the way. I'm now not scared of being a single mother."

Jourdan didn't have to diet, post-baby: "To be honest, I didn't work out or follow an eating plan. I was loving my new body so much I was trying my hardest to keep the baby weight on! I breast fed for nine months though and people say breast-feeding helps you lose weight."

Karlie wants a big family: "[My longterm dreams are] to go to medical school and start a big family of my own… I want five boys!"

Jourdan loves her some fried chicken: "I've been known to turn up to a show with KFC! I don't care. If I need to eat, I'm gonna eat."

Jourdan's son, Riley, has sickle cell disease: "The hardest thing is not knowing if Riley is just miserable or if he's in pain and having a crisis. Last December he had his first crisis, and he was submitted to hospital for a blood transfusion. It was the scariest thing. All I wanted to do was take the pain away… I felt helpless as a mother. But now we have experienced his first crisis we are more prepared and know what to look out for."

Jourdan's most fun night ever involved Abbey Lee Kershaw getting locked in a bathroom: "We went to the Versace party in Milan with Abbey Lee. Abbey got locked in the toilets for an hour and we couldn't get her out! I will never forget that."