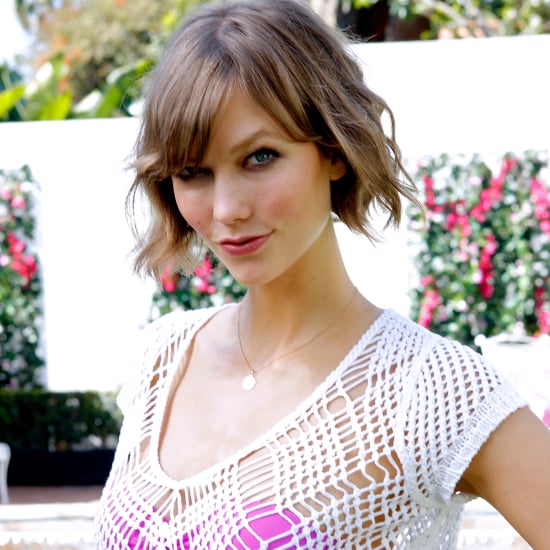 Karlie Kloss has finally gotten her wings. The model is now a bona fide Victoria's Secret Angel, and she put her halo on display this week at the brand's Spring 2013 swim collection photocall in Los Angeles.

Kloss, flanked by veteran Angels Candice Swanepoel and Alessandra Ambrosio, posed for the cameras in a white knit top and a pink bikini. She also participated in this week's #AskAnAngel Q&A session on Twitter, fielding fans' questions about everything from her favorite actress ("I'm currently in love with Jennifer Lawrence," she said) and her favorite colors to wear to the beach.

While Kloss has appeared in ads for Victoria's Secret and walked in the brand's annual fashion show not once, but twice, her official inclusion on the roster of Angels will doubtlessly mean big things for her career. Being an Angel is a little bit like a stairway to heaven in the modeling industry for a variety of reasons — not least of which is that Angels tend to be the highest-earning women in the business. On Forbes's list of the highest-paid models of 2012, six were current or former Angels.

Celebrity Instagrams
Karlie Kloss Cast Her Ballot in a Comfy Polo, Skinny Jeans, and a Biden-Harris Mask
by Yerin Kim 10/27

Karlie Kloss
Can We PLEASE Address the Beautiful Homes These Supermodels Live In?
by Sarah Wasilak 5/01