Among Coachella's best-dressed A-list pack, Kate Bosworth certainly ranks high, and it has a lot to do with her day-one look. The blond actress hit the fairgrounds in a scalloped white leather shorts set that not only proved fresh and just a tad bit girlie, but also — thanks to the allover laser-cut perforations — supplied a new way to wear white this Summer. The best part? This outfit comes courtesy of Topshop's not-yet-debuted Festival collection, which promises a 360-degree campaign dedicated to the music, clothes, film, and attitude of the British music festival scene. And who better to test drive the Festival lineup than a bona fide cool girl (that just so happens to have her own ties to Topshop, too)? 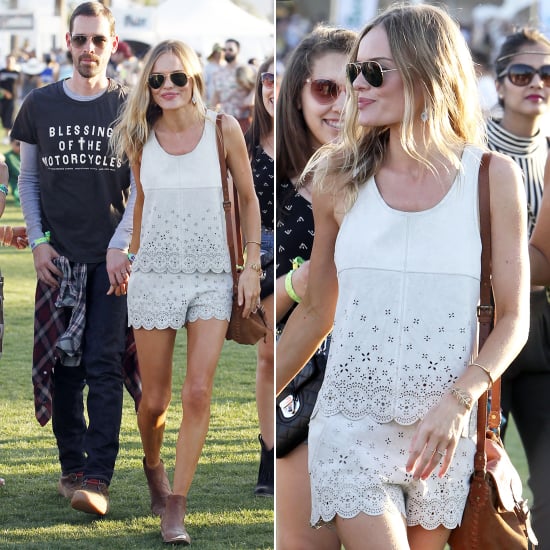 We love that she stuck to her signature "less is more" styling approaching, adding only the minimum in festival-going necessities. Her brown shoulder bag, aviator sunglasses, metal-tipped ankle boots, and Jennifer Fisher cuff were the only accessories thrown into the mix. As for actually getting our hands on her Topshop Festival combo, we're counting the days until we hear more about this unreleased collection — stay tuned.

Ariana Grande
Ariana Grande's Outfits in "Positions" Are the Perfect Mix of Sexy, Sassy, and Sophisticated
by Nikita Charuza 9 hours ago

Rowan Blanchard
Rowan Blanchard's Sexy, Sheer Mint-Green Dress Is $115 and Designed by 2 Friends in London
by Kara Kia 12 hours ago