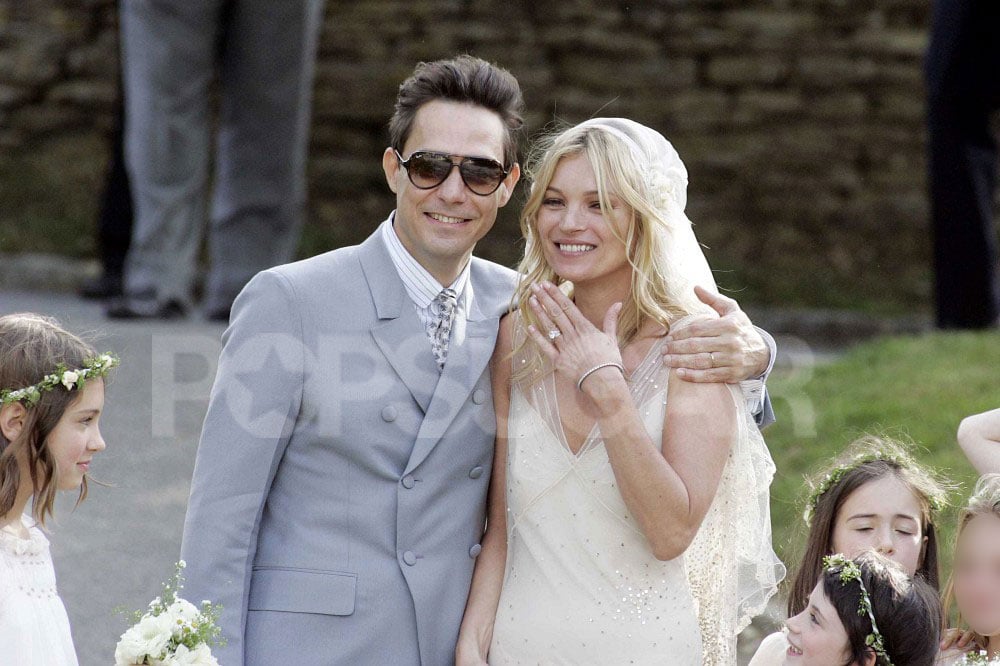 >> A few pictures are starting to roll in of Kate Moss heading to her wedding in a silver Rolls Royce, her father Peter and 8-year-old daughter Lila Grace Hack (who's set to serve as her chief bridesmaid and is said to be wearing Stella McCartney) by her side. Her dress, confirmed to be designed by John Galliano, is lightly sequined, and her shoes are confirmed to be Manolo Blahniks with blue lining — as in "something blue" — rather than Christian Louboutin as previously thought.

The wedding dress was inspired by Zelda Fitzgerald, whose engagement ring Moss is wearing. Galliano did the final fitting earlier this week in Europe, while in care, WWD reports. “Kate is his biggest muse and he was never, ever going to let his friend down,” one source said. “He did Kate’s 21st birthday dress, her 30th birthday dress, and Galliano’s show was the first she ever walked for. So this wedding day ties up a lot of things beautifully.”

Moss is expected to make a number of outfit changes this evening, Vogue UK reports, three of which will be designed by her close friend Stella McCartney. For her first dance, Moss will wear an oyster silk chiffon dress with embroidered bodice and a cut-out back, then she'll change into a mini body-con dress with a plunging back and beading all over. Finally, for her going-away suit, she'll wear a single-breasted, three-piece white wool suit.

Naomi Campbell (wearing Givenchy couture by Riccardo Tisci), Stella McCartney (in a white, tailored look of her own design), Daphne Guinness (in a light blue dress of her own design), Philip Treacy, Carine Roitfeld (in vintage Galliano), Emmanuelle Alt (in Balmain), and Anna Wintour (in a Mondrian-inspired Prada dress) are all understood to have attended the ceremony.

Celebrity Families
Gabrielle Union on Zaya Coming Out as Trans: "It Was Just a Beautiful, Full-Circle Moment"
by Murphy Moroney 4 days ago