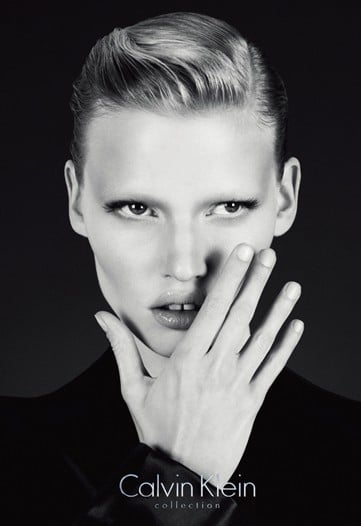 >> Lara Stone is following the footsteps of Christy Turlington, Kate Moss, and Natalia Vodianova — whose associations with Calvin Klein were instrumental in their careers — by scoring an exclusive with the brand for both campaigns and Fall runway appearances.

Stone is set to appear in three Fall 2010 campaigns; the first time that Calvin Klein has chosen one model to do so in years. “I conceived my fall 2010 collection with a self-aware and assured woman in mind,” Francisco Costa said. “For me, Lara was the perfect choice for the new campaign because she is a woman who epitomizes confidence and sensuality.”

Fashion News
Chromat Shows Swimwear For Trans, Nonbinary, and Queer People on a Feel-Good Runway at the Beach
by Sarah Wasilak 1 week ago
Halsey
Halsey Has Us Hypnotized in a Gothic Red Corset During a NYFW Date Night With Alev Aydin
by Chanel Vargas 2 weeks ago