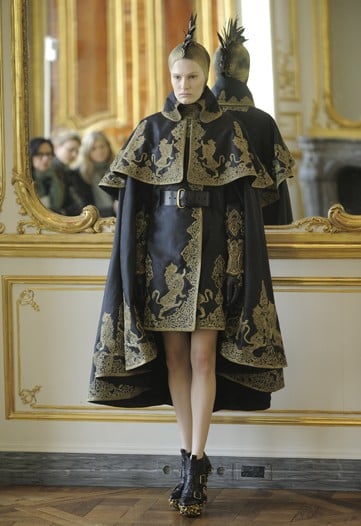 >> Yesterday, in a gilded salon at PPR's headquarters, Lee Alexander McQueen's final collection, consisting of 16 pieces, was presented. Each piece, topped with gold feather mohawk headpiece and finished off with hand-carved wooden-soled shoes, displayed digitally captured works of art — the angels of Sandro Botticelli and the demons of Hieronymus Bosch — woven into the fabric.  The solemn parade was set to the music McQueen had been listening to as he cut and fit the collection, sung by the German soprano, Simone Kerme.

Sarah Burton, McQueen's right hand and design assistant for 16 years, said that in the beginning of the Fall 2010 collection, McQueen had turned away from the world of the Internet, which he had harnessed for his last show. "He wanted to get back to the handcraft he loved, and the things that are being lost in the making of fashion. He was looking at the art of the Dark Ages, but finding light and beauty in it. He was coming in every day, draping and cutting pieces on the stand." At the time of McQueen's death, the 16 pieces shown had been 80 percent finished.

Tomorrow, retailers will be invited to buy a showroom collection spanning about 160 pieces.  The brand is expected continue with more commercial collections, and the clothes shown yesterday are not expected to be widely sold.  Instead, according to a spokewoman, they will be loaned out on a limited basis to a few fashion magazines.

Before his death, McQueen told LOVE: "I’m 40 now, but I want this to be a company that lives way beyond me, and I believe that customers are more important to making that happen than press. When I’m dead, hopefully this house will still be going. On a spaceship. Hopping up and down above the earth.”  For the moment, the design future of the label rests on the shoulders of the studio team led by Burton. “That will continue for the foreseeable future,” a spokesman said.