>> Hedi Slimane first met Georgia May Jagger at Fourchette, her father Mick Jagger's French residence in 2007, where he photographed her. The two have reteamed for Harper's Bazaar's November 2010 issue, for which Slimane filmed and photographed Georgia in New York — where she recently moved — in September. Slimane set the film (above) to a soundtrack from British band Egyptian Hip Hop, because he "want[s] more people to be aware of their music" and because "the band is precisely Georgia's age, and generation." The film, according to Slimane, is "meant to also be evocative of the glamorous heritage of Georgia M. Jagger, [and her parents] Mick Jagger and Jerry Hall['s] legacy."

Slimane captures Georgia topless — not something new for the model, who has more than a few discreetly topless ads for Hudson Jeans floating around. She says her parents don't mind. "My mum did a lot of very provocative work with Helmut Newton. She understands. It is pretty crazy, though. I didn't think that it was going to be on giant billboards everywhere. I'm sort of like, Oh, God!"

She likes modeling jeans, though: "When Mum was first modeling, it was all about that Thierry Mugler woman with the tiny waist and the giant ass. They used to pad their hips. I think it's much sexier. Lizzy [Jagger, her sister] and my dad are naturally skinny. I model jeans. You need a bum for those."

But despite the leniency when it comes to toplessness, Jagger says of Hall: "My mum is actually really wholesome. She remembers everything because she didn't take drugs like everyone else. She'll see a black-and-white picture taken 40 years ago and say, ‘I was wearing a red dress and gold eye shadow.' It's incredible." Also: "My mum hasn't been to New York for so long, but she used to live there in the '80s. So when she found out I was moving to Alphabet City, she freaked out."

And as for her father, Mick: "My dad's not a very intimidating father figure." Georgia has been dating Django James Stewart, the musician son of Dave Stewart of the Eurythmics, for the last two years. "Our parents know each other," she adds. "My dad's cool with that kind of stuff." 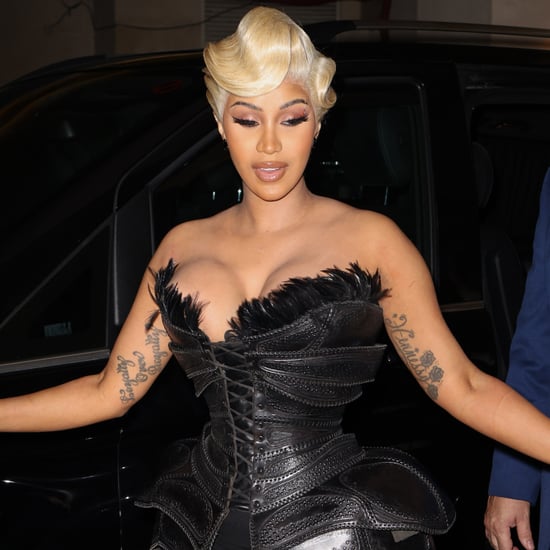 Cardi B
Someone Get Cardi B a Sword, Because Her Vintage Mugler Dress Is Made For a Fashion Battle
by Chanel Vargas 9/29/21