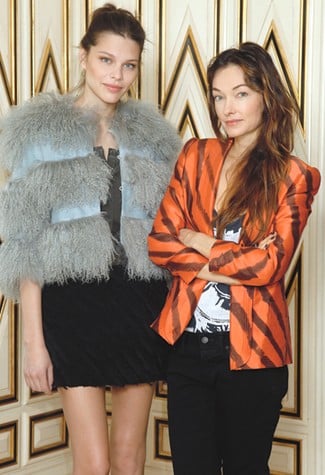 >> More than a couple of designers are admitted fans of Kelly Wearstler — but the interior designer is now joining their ranks. “I have been thinking about it for probably five years,” Wearstler told WWD. “So much of my influence in interior design comes from fashion, and everything relating to fashion, from jewelry, which can be reminiscent of sculpture, to the colors and silhouettes that I find in clothing. This feels like a natural evolution." Her debut collection, for Fall 2011, includes clothes, jewelry, clutches, and scarves, and will be sold exclusively at Bergdorf Goodman in a Wearstler-designed space.

“When you look at the collection, it feels like it could be a few rooms in a house,” says Wearstler, who will present the collection during New York Fashion Week by appointment. “Each delivery has its own little voice, but works very harmoniously with the whole collection.” The jewelry was inspired by Wearstler's travels from Brazil, Argentina and Uruguay, and prices are set from $205 to $1,395 for clothes; $155 to $995 for jewelry; and $795 to $995 for bags.

Bergdorf SVP Linda Fargo is sold on the collection: “Kelly, more so than a lot of other people who get involved in fashion and didn’t technically come up through the ranks of studying it, is genuinely, in her heart, a free-spirited fashion person. With people who don’t come up through the traditional schooling of fashion, there is always a certain skepticism. Mary-Kate and Ashley Olsen probably met with a lot of skepticism, but they were able to prove themselves, and they showed a lot of commitment to it. You always worry that this could be just a dalliance for someone, a fascination for a year…a way for them to expand themselves as a brand. Kelly has a track record with us. I would bet on anything that she decided to apply her design sense to.”