Last night's Time 100 gala not only celebrated its 2012 list of most influential people, but it also drew an insanely influential crowd to its party. While we were hoping that list honorees Pippa and Kate Middleton would surprise us all with an appearance, we were just as pleased to spot the likes of Claire Danes in head-to-toe Lanvin and Rihanna in a princess-worthy pink Marchesa dress and Christian Louboutin heels. But they weren't the only ones to impress us with their red-carpet style — Kristen Wiig donned a black lace Stella McCartney jumpsuit and Gucci T-bar sandals, Georgina Chapman posed in one of her own frothy white frocks, and Lauren Bush stunned in a chic white floor-length gown. Suffice it to say, the evening was not short on glamour or A-list power. Now, it's time for you to decide who earned the title of Time 100 gala's best-dressed attendee. 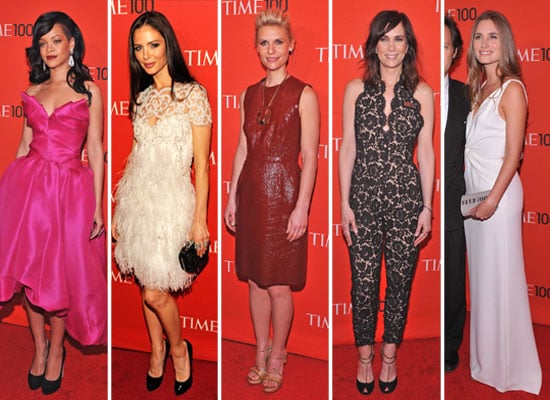 Jonah Hill
Jonah Hill Talks About Being Overweight and Having a Sense of Style: "Be Yourself . . . Lean Into It"
by Sarah Wasilak 6 hours ago