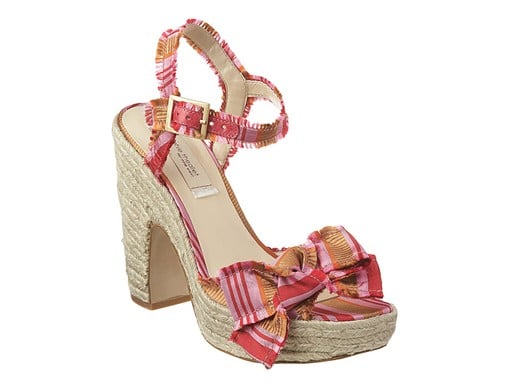 >> Nine West, which previously collaborated with Vivienne Westwood, Thakoon, and Sophia Kokosalaki in 2006, is kicking off a new collaborative initiative, "Shoelaborations," which will involve working with up-and-coming designers, artists and musicians. First up? Sophie Theallet and Giles Deacon.

The Sophie Theallet for Nine West collection includes "fresh and feminine" shoes, accessories, and handbags, and hits stores May 1. “For the collection I designed my own stripe print, which you will see interpreted on a ballet flat, a raffia wedge and a double platform sandal. I also designed little straw bags with charms representing icons of France,” Theallet explained. Prices are expected to run $79 for flats up to $109 for the platform espadrille sandal.

Deacon's collection, meanwhile, is slated for Fall 2011. Nine West is already in talks for its 2012 partnerships, but declined to give any more details.