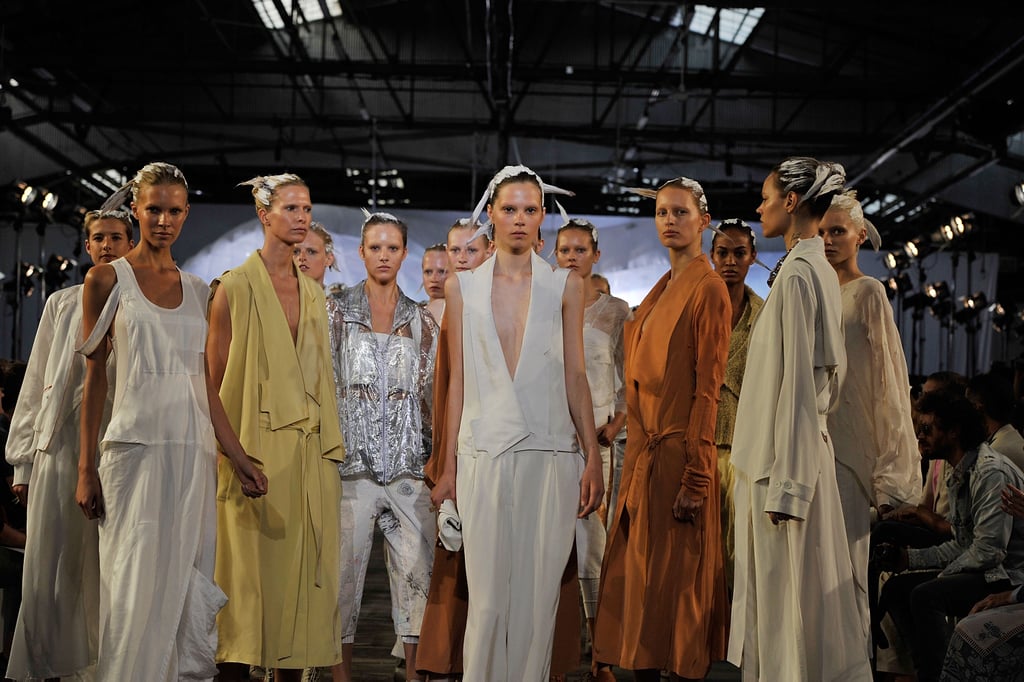 >> When Alexander Wang took a trip to check out the retail contemporary floors, he was struck by the fact that “everyone’s doing the same skinny jean, long tee, leather motorcycle jacket. It’s become a uniform. Too much.” It was time for a change. So no more of the "urban thing of a pair of tiny shorts and a big top —the inverted triangle," he said. "We turned it upside down this season.”

He also did without black for Spring 2011: “I thought it’s time to do something optimistic and pure.” Which meant that his models — including Karolina Kurkova, Agyness Deyn, and Omahyra Mota in a runway return — went without makeup and had their eyebrows bleached and what looked like White-out applied in their hair.

The collection had a construction theme — pieces derived from painter's overalls, worker's boots, and duct tape detailing — reflective of Wang's current state of mind: he just added a new floor to his office, is renovating a Tribeca apartment, and is working on his first retail location. And it marked the debut of his first in-house print, made by having his staff and interns doodle on a 5-foot-by-5-foot sheet of paper in the studio.

Spring Fashion
Sage, Coral, and Powder Blue Are the Colors of Spring 2021 — Start Shopping Them Now
by Sarah Wasilak 3 weeks ago