For Spring, Stella McCartney left Bambi in the woods for something nearer and dearer to her heart: Lucky, her pet Dalmatian. "I love the way it’s very graphic and soft at the same time, due to its double exposure,” said McCartney when describing the photo of Lucky, which was taken by her mother, Linda McCartney, in '76. Combine that with the magical work of Fab model of 2009, Natalia Vodianova, and photogs Mert Alas and Marcus Piggott, and you have a whimsical masterpiece. The opposing elements between Stella's designs and the black and white backdrop is eye catching and interesting. 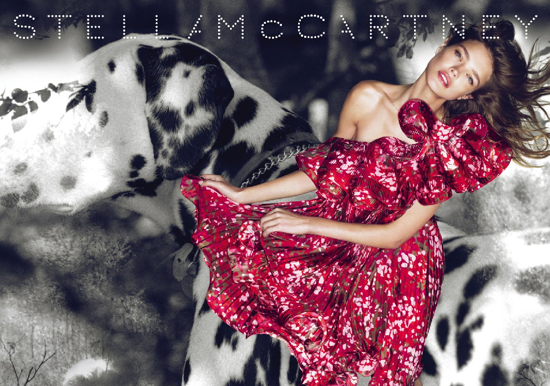 Stella describes the contrast as "fashion meets reportage, mixing color, and black-and-white. A family animal with an outside atmosphere meets studio lights, camera, action! Opposites meeting in one image, illustrating the masculine and feminine sides of the Stella McCartney brand." I kinda love it, do you?

Julianne Moore
Christian Siriano Designed a "Vote" Dress, and Celebrities Are Already Wearing It
by Nikita Charuza 2 weeks ago