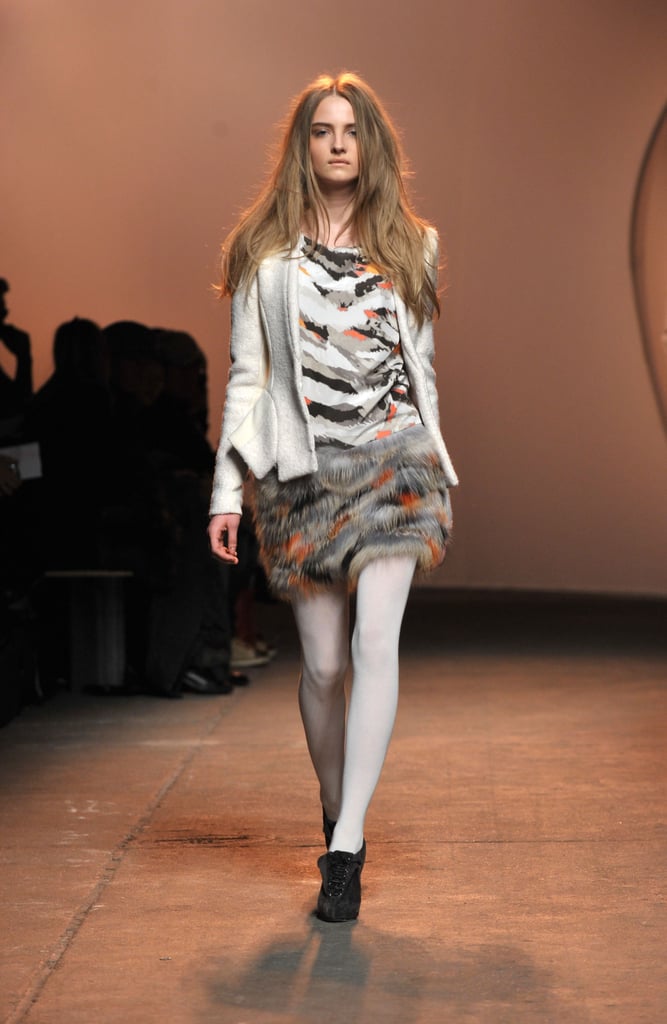 >> It wouldn't be Fashion Week if everyone wasn't flying by the seat of their pants.  Imogen Morris-Clarke, who walked Thakoon yesterday, Tweeted post-show: "Hanne [Gaby Odiele] was in [her] own clothes as the show began!!! manic."

The pre-show panic wasn't felt in the show's audience, however, where Andre Leon Talley was wearing a sweater with big fuzzy dollar sign on the back paired with a furry scarf and Grace Coddington took her time chatting with fellow front rowers before taking her seat. As the lights went down, the music took on the pervasive pounding of a heartbeat, and the models emerged from a cavernous opening, framed by two oversized shapes which curled over their heads and softly glowed. They stopped in their tracks to pose in front of the photographers before carrying on down the runway.

Panichgul says the collection, with its fur-lined hoods, handkerchief hems, shearling boots, and pom pom fringe, was inspired by the image of a half-shaven sheep. "It captured everything that I wanted in my collection,” he explained. “It was raw, primitive and soft all at once.”  The perfect embodiment of the inspiration: a tiger-print dress, the bottom half all tiger-striped fur.

Fashion News
Chromat Shows Swimwear For Trans, Nonbinary, and Queer People on a Feel-Good Runway at the Beach
by Sarah Wasilak 1 week ago
Halsey
Halsey Has Us Hypnotized in a Gothic Red Corset During a NYFW Date Night With Alev Aydin
by Chanel Vargas 2 weeks ago