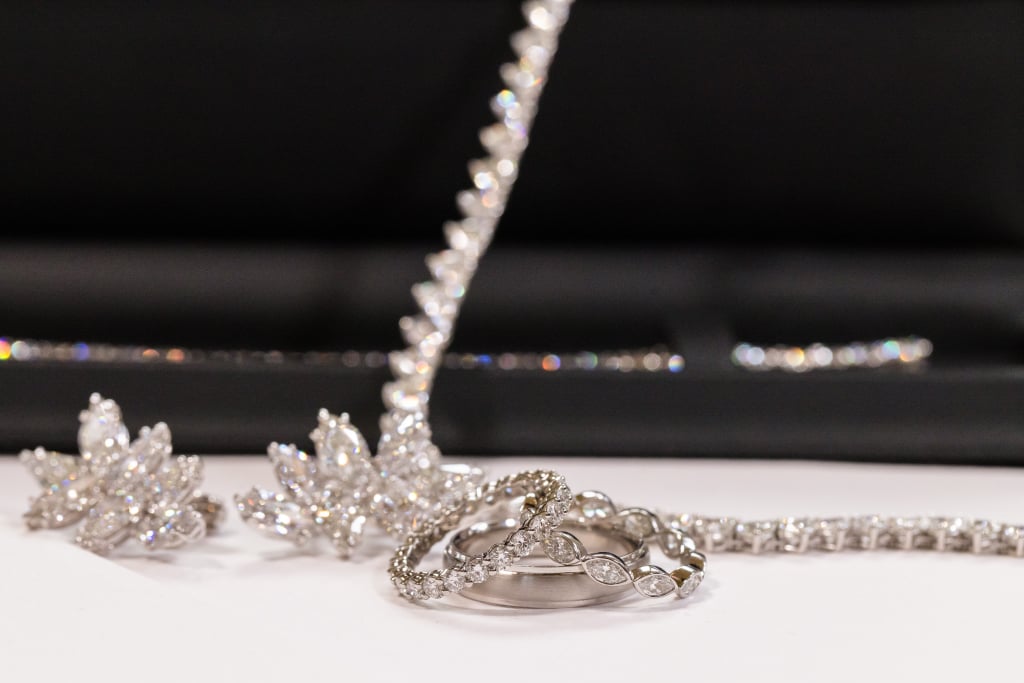 Britney Spears and Sam Asghari got married during a ceremony hosted in their Los Angeles home on Thursday, June 9. The couple shared news of their engagement last September and have officially tied the knot with stunning wedding bands by fine-jewelry designer Stephanie Gottlieb. Spears wore a classic round diamond eternity band in a shared prong setting encrusted with diamonds all around. She also wore a marquise diamond band, set east-west in a bezel eternity style. Asghari, meanwhile, sported the designer's step-edge comfort-fit 5mm band and beveled comfort-fit 5mm band.

The jewels perfectly complemented the couple's sophisticated wedding ensembles. For the big day, the bride wore a custom white gown by Versace, a designer fans were expecting after Spears announced Donatella Versace was her wedding-dress maker. The garment in question featured a plunging neckline and floor-sweeping train and was completed with a sheer veil, sheer gloves, and white pumps. She exclusively wore Gottlieb jewelry for the occasion, accessorizing with a heart-shaped 27-carat diamond tennis necklace. She later changed into three additional outfits, including a black Versace minidress, a two-tone ensemble, and a red minidress with fringe sleeves. Asghari opted for a classic black tuxedo paired with a watch.

The couple said "I do" in front of a star-studded crowd, including many of Spears's friends. Madonna, Paris Hilton, Selena Gomez, Drew Barrymore, and, of course, Donatella Versace herself all made stylish appearances. Madonna wore a vibrant Dries Van Noten kaftan-style dress in a pink, purple, and green palette. Hilton, meanwhile, wore a glittering black Versace gown, and Gomez wowed in a blue strapless jumpsuit. Barrymore rocked a brown maxi dress, and Versace wore her own creation: a pastel-blue pin dress. Keep reading to bask in the joyful newlyweds' celebrations and take a closer look at the wedding bands.