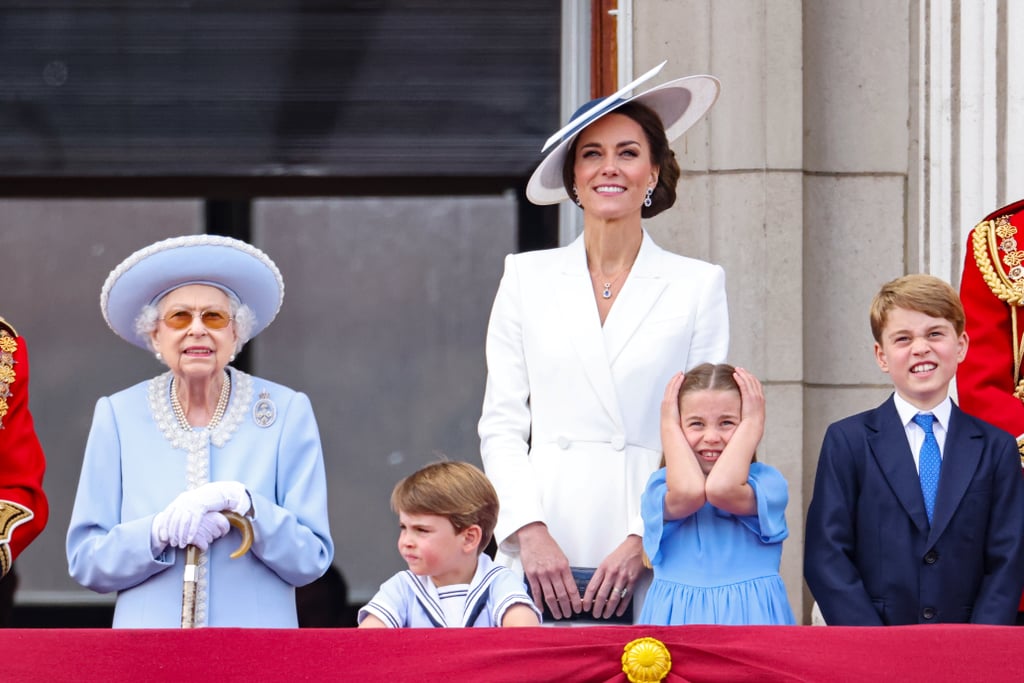 Kicking off the Platinum Jubilee weekend at Buckingham Palace, Kate Middleton rode alongside Camilla, Duchess of Cornwall, in a horse-drawn carriage as the duo waved to crowds at Queen Elizabeth II's birthday parade during Trooping the Colour on Thursday, June 2. The Duchess of Cambridge made a stately appearance in a crisp, white double-breasted blazer-style dress with accentuated shoulders, sharp lapels, and a knee-length skirt by Alexander McQueen — a design she previously wore at the G7 Leaders' reception in June 2021. This isn't the first time she's reworn garments: her blue Catherine Walker coat, for example, is a favorite.

Middleton enhanced the regal look of her ensemble with an equally elegant hat from Irish designer Philip Treacy in navy and white. Her hair, styled in a twisted knot, was pulled back to display diamond and sapphire earrings. The jewelry was a nod to the late Princess Diana, who owned the exact pieces. Indeed, the Princess of Wales wore them on multiple occasions, most notably at the Met Gala in 1996. Unlike Diana, who paired them with a sapphire pearl choker, Middleton teamed hers with a matching pendant necklace for the ceremony. Next to her, Camilla opted for a pastel-blue striped dress by British fashion designer Bruce Oldfield and a matching hat by Philip Treacy.

Middleton's children — Prince George, Prince Louis, and Princess Charlotte — were also on the carriage in a navy-blue suit, a white-and-navy sailor uniform, and a blue dress, respectively. Blue was a popular color choice at the event, which marked the 70th anniversary of the accession of Queen Elizabeth II on Feb. 6, 1952. Meghan Markle also got the memo, making an entrance in a sophisticated off-the-shoulder navy dress and a Stephen Jones wide-brim hat.

Ahead, see the stylishly dressed royal members in action.

Lori Harvey
Lori Harvey Rocks a Sheer, Tiger-Print Catsuit For a Night Out
by Shelcy Joseph 2 days ago