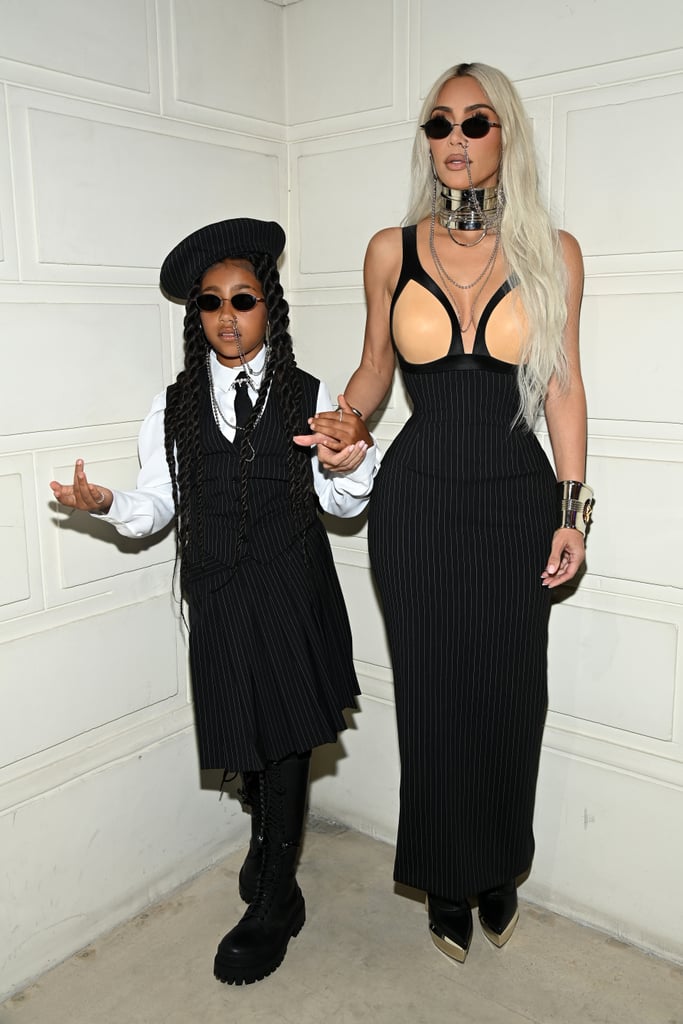 Moments after Kim Kardashian's buzzy debut on the Balenciaga couture catwalk, the business mogul and her daughter North West caused quite a stir at the Jean Paul Gaultier couture show. The duo matched in pinstripe tailored silhouettes reminiscent of archival Jean Paul Gaultier looks, as if they had set out to re-create the memorable 1992 photograph of the designer and his muse Madonna walking side by side at an amfAR Gala, a similarity pointed out by the Instagram account Diet Prada.

The Skims founder opted for a formfitting black maxi dress from the Jean Paul Gaultier collection by Olivier Rousteing, complete with a plunging neckline and prominent trompe-l'oeil nipple cups in beige. The design, which also made an appearance on the runway, brings to mind the revealing ensemble Madonna once wore to the benefit gala. While the superstar put her breasts on full display, Kardashian went for a more demure approach, exposing only her cleavage. She styled the ensemble with a silver tin-can choker necklace, a matching silver cuff bracelet, a pair of black round sunglasses, and the pièce de résistance: a faux nose ring connected to a stack of silver chains and attached to her ear. Her tall black-and-silver metal platform boots were also right on theme.

Madonna acknowledged the reality star's tribute a few days later on her Instagram Story. On Saturday, July 9, the pop icon shared a side-by-side collage of the two images, writing "Kewt," then added a series of blue heart emoji next to the designer's initials, "JPG."

Meanwhile, Kardashian's eldest daughter embraced steampunk style as well, wearing the same nose piercing with a matching striped set that featured a button-down vest, beret, and tie. Joining her mom and grandmother Kris Jenner at the show, the 9-year-old cemented her place as a rising fashion star during Paris Haute Couture Fashion Week.

Near the catwalk, the star-studded audience awaited Rousteing's guest couture collection for Jean Paul Gaultier. He sent a parade of menswear looks inspired by JPG's spring 1994 collection "Les Tatouages" down the runway, as well as several cone bras, matelot stripes, and corseted silhouettes. He also evolved the tin-can packaging of Gaultier's perfumes, converting it into a strapless gown and minidress, the latter of which was finished with chunky combat boots with metallic platforms. Ahead, check out the stylish mother-and-daughter duo in action and Madonna wearing the NSFW outfit, and catch a glimpse of the front row and the new collection.