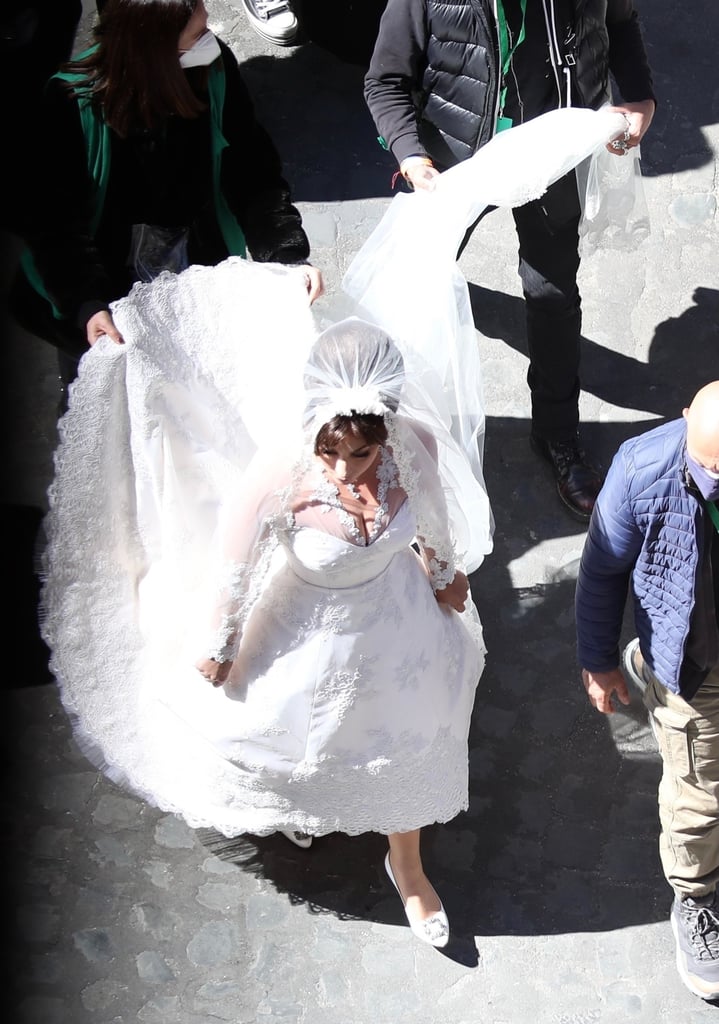 Love is in the air on the set of House of Gucci as Lady Gaga is seen wearing a wedding dress while filming. The singer plays Patrizia Reggiani in the upcoming biographical crime drama about Maurizio Gucci, which is directed by Ridley Scott. ICYMI: the movie follows Reggiani's involvement in her ex-husband's 1995 assassination. We've all been following along as we see snippets of the gorgeous costumes as they film in Milan, Italy.

First, Gaga caused a frenzy by posting a picture wearing a turtleneck and fuzzy hat with costar Adam Driver, who plays Maurizio Gucci. Since then, we've seen her wearing a polka-dot dress that reminded us of the one Julia Roberts famously wears in Pretty Woman, and now, she's been spotted in a wedding dress. Gaga was photographed wearing a white lace wedding gown to film Reggiani's 1973 nuptials to Gucci. The gown seemed to match what Reggiani actually wore on her wedding day. It featured a classic A-line silhouette with a sweetheart neckline. The dress also featured floral detailing and a high-low hemline. She finished the look with a pair of white Manolo Blahnik heels, a necklace, and a floor-length veil worn over a high updo. Keep reading to get a glimpse of the stunning look from all angles ahead.

Related:
Jill Biden Has Her Own House of Gucci Moment in a Brown Polka-Dot Dress Like Lady Gaga's
Previous Next Start Slideshow
Lady GagaMoviesWedding DressesHouse Of GucciScreen StyleBridal