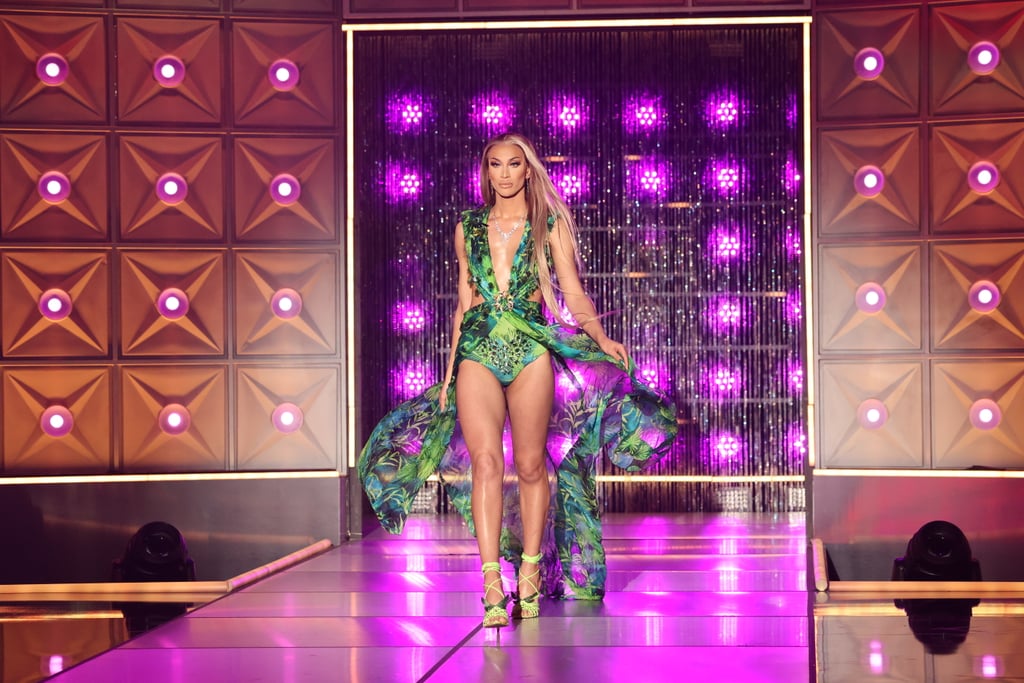 Many have worn iterations of Jennifer Lopez's famed palm-print Versace dress over the years, but not so many have gotten their hands on the multi-hyphenate's exact pieces. Well, on Friday's episode of "RuPaul's Drag Race"'s 14th season, queen Kerri Colby wore the updated version of Lopez's gown for her "Night of 1000 J Los" runway look. Colby's big moment marks the first time a queen has worn the exact dress for their "inspired by" look in the history of the show.

"J Lo has always inspired me in regards to me coming into my transition," Colby told POPSUGAR, which made walking in the special dress "so emotional." She added, "I won, and I did it in f*cking Versace. Like, who can say that? . . . It's just a dream." The contestant borrowed the piece from her friend, who she knew was in possession of both J Lo's original Grammys dress from 2000 and her sexier 2019 version at Milan Fashion Week. While Colby brought both to the "RuPaul's" set, she ultimately chose "the more obnoxious, louder, more Versace signature" revival.

She continued, "I literally manifested walking in fashion back when I was a little kid that wasn't understood, with little towels and sheets, throwing them around looking all pretty. I would usually get spanked for that. But I wanted to turn my trauma into triumph. I wanted to wear something that really validated me in a way, in being able to be myself and be visible, and show who I am and who I worked to be." Ahead, get a closer look at Colby and Lopez wearing the same iconic dress.