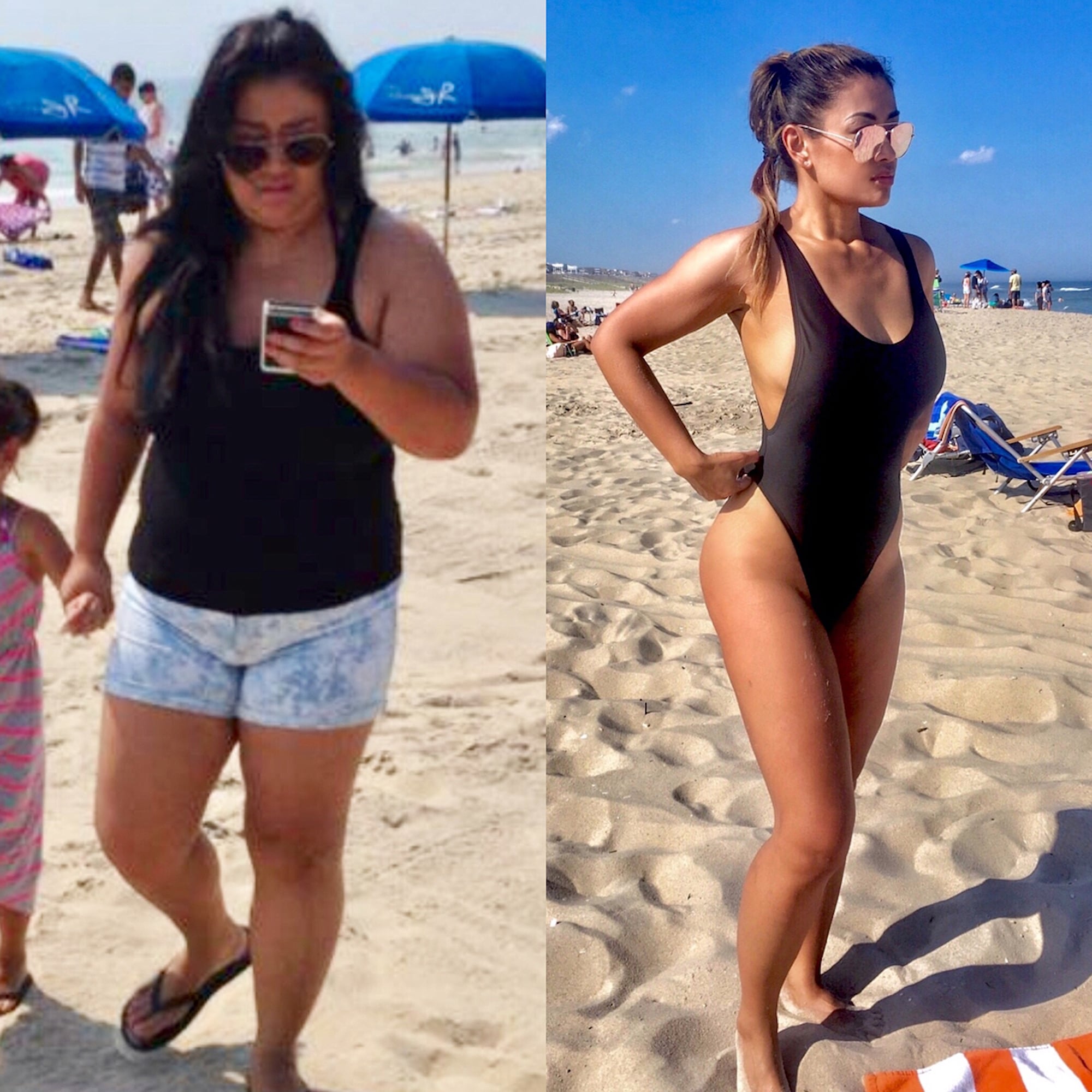 Christine Carlos was at the beach in June 2012 when a sad realization hit her: at 225 pounds, she was out of breath and struggling to keep up while playing with her young daughter in the sand. "I was getting too big and lethargic," Christine told us while looking back on that day five years later. "I wanted to be in good condition for my growing child. I felt like I needed to be in control of myself and do it for my child as well," she said.

"I started slow by changing some habits little by little."

That fateful day motivated Christine to shed a whopping 100 pounds over the course of the following year. It all began by making minor alterations to her diet and exercise routines, which blossomed into bigger goals down the line. "I started slow by changing some habits little by little," she explained, also noting that she read health magazines and took up doing plenty of research about weight loss. Christine swapped fried and processed foods for meals that mostly consisted of vegetables and ate minimal carbs, usually sticking to the below menu each day:

However, once a week, Christine did allow herself to enjoy a good ol' cheat meal to curb her cravings. Her personal go-to? A burger and sweet potato fries — yum!

On top of those healthy meals, Christine was consciously consuming plenty of water — usually an entire gallon per day, to be exact — to curb her appetite. To make sure she got the job done by bedtime, she initially carried around a gallon jug with her as a reminder and later opted to ditch the clunky gallon jug for two half-gallon bottles each day instead. On days she had trouble finishing up those last few gulps, she added calorie-free flavoring in it, such as MiO, to help it go down the hatch more enjoyably.

Related:
Down 126 Pounds, and This Phone Trick Keeps Her Motivated for 4 A.M. Workouts 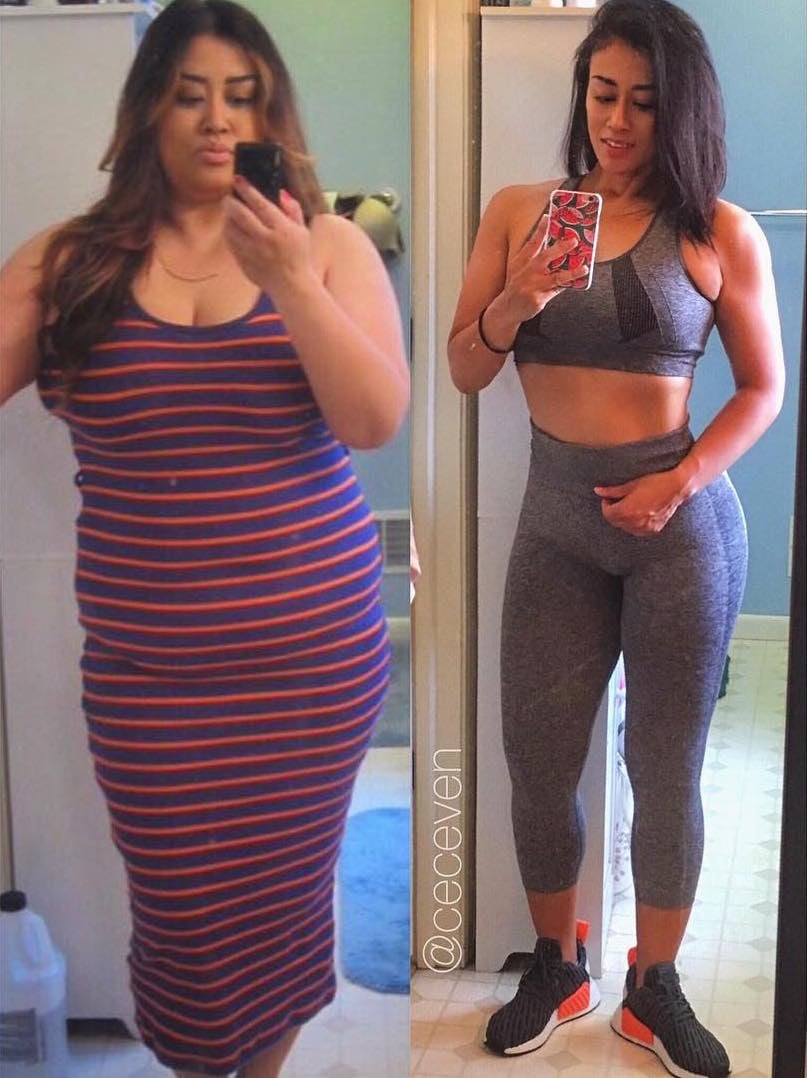 In addition to these diet adjustments, Christine simultaneously upped her exercise habits, using the treadmill in her basement for 45 minutes of cardio six days per week. She "mostly walk[ed] because of my size, and I eventually started jogging as I progressed," she told us. Christine also incorporated some tabata into the mix to switch things up every now and then. As she slowly but surely progressed, Christine joined a gym, where she taught herself the ins and outs of exercising.

"Weightlifting accelerated my weight loss even more and really reshaped my body."

By July 2013, just one year after it all began, Christine was down 100 pounds and added another aspiration to her list: to enter a bikini competition. "I thought it would be great to set another goal and push myself further," she said, adding that she wanted to "get out of [her] shell." To stay on track, she hired a coach who helped her train with weights and plan out her diet. "Weightlifting accelerated my weight loss even more and really reshaped my body," she told POPSUGAR.

Related:
Kaitlyn Is Down 78 Pounds — 53 Just From Weightlifting 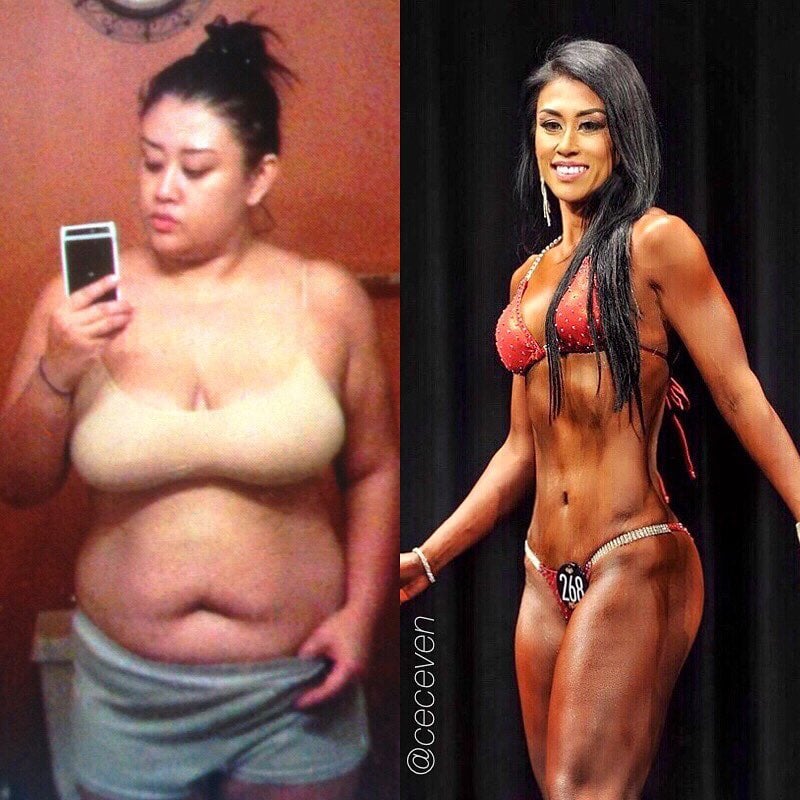 Christine performed in bikini competitions for two years and has since loosened up on her former diet restrictions and exercise schedule. Instead of mostly doing cardio, Christine now heavily focuses on weightlifting, training with weights five days each week and only doing 30 minutes of cardio three days per week. As for her food intake, Christine said her diet is "more intuitive" nowadays, meaning she eats nourishing foods — "lots of proteins, green vegetables, complex carbs, and healthy fats" — without depriving herself.

Since taking a break from competition training, Christine has gained 15 pounds back and couldn't be more content with her progress. Now weighing about 140 pounds, Christine offered some helpful advice for people looking to similarly transform their bodies. "Take it day by day. Don't think about the long term and just focus on what you need to do at the moment, because if you focus on how you want to look, you'll easily get discouraged," she said.

Above all, she said it's important to note that fitness is a "lifelong journey," so failing along the way is totally OK as long as you keep pushing yourself to continue. "Most importantly, be kind to yourself and love the process," she said. 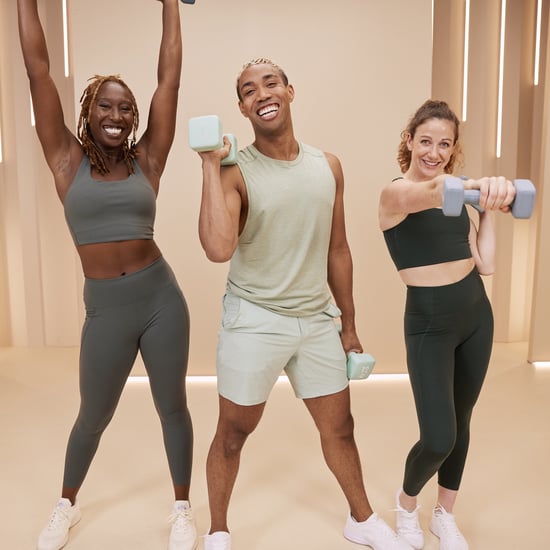 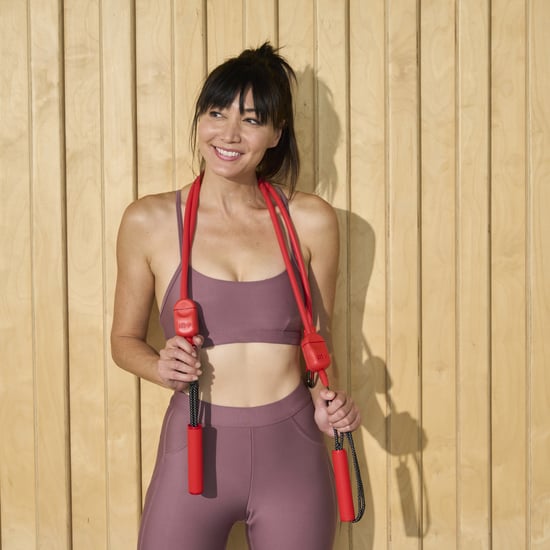