Recently I asked FitSugar readers to share their tips on how to cut down on their sugar intake, and it sparked a whole discussion in the comment section about using agave nectar. Some said it's a natural sweetener which makes it healthier than sugar, and others debated against that idea, saying it is highly processed and just as bad as high fructose corn syrup. So what's the truth? 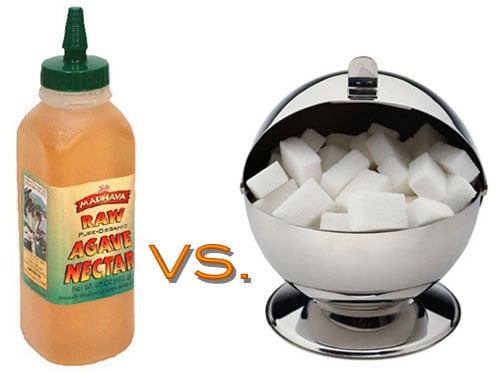 As you can see from the chart below, they're pretty similar nutrition-wise. What you can't tell from the comparison is how the body processes and reacts to each. Agave is praised for being low on the glycemic index (GI) rating, which means it won't cause a spike in your blood sugar levels the way sugar does. High-GI foods like white sugar tend to make us feel hungry sooner since they are digested quickly. So foods made with agave nectar may keep you feeling fuller longer than foods made with the white stuff, which translates to eating less.

But many brands of agave nectar are highly refined, containing almost 100 percent fructose, which is a higher percentage than that found in high fructose corn syrup (HFCS). Fructose is a sweetener known to raise triglycerides, promote belly fat, and contribute to fatty liver, obesity, diabetes, heart disease, and high blood pressure. Another thing to note is that some distributors of agave nectar have been labeling HFCS as agave nectar, so the FDA recommends looking for labels that say "hydrolyzed inulin syrup," which means it's real agave.

Although both sugar and agave nectar come from plants, both are sweeteners and provide little to no nutrition value. I know it's not what you want to hear, but sweeteners like these should be used sparingly in your diet. If you're having a sugar craving, you're better off reaching for a piece of fruit since the fiber will help with digestion and satiate your hunger.