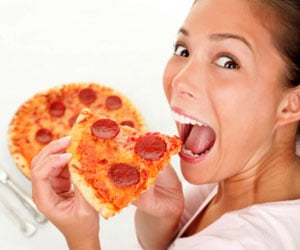 Salt is the ultimate spice since it enhances a food's flavor, and opens up our taste buds, which makes everything taste better. The reason so much salt is used is because there's no healthy and comparable salt substitute, like there is for sugar. But excessive sodium in the diet raises blood pressure, which puts a person at risk for heart attacks and stroke. Not to mention, consuming a lot of salt also taxes your kidneys, which increases your risk of kidney disease and stomach cancer.

Since only about 11 percent of a person's salt intake comes from a salt shaker that means we down the rest of our sodium from food that already contains it like the takeout we ordered from down the street and packaged foods from the grocery store. Many people just don't realize how high the sodium content is in common foods. Two slices of pepperoni pizza contain 1365 mg!

In April, a report by the Institute of Medicine called for "federal limits on sodium content in packaged and restaurant food." The FDA has yet to make any specific rules, but I'm wondering, does it make you feel better to know that mandatory sodium reduction could be on the horizon, or should food be left as is so people can make their own decisions about how much salt they consume?

Healthy Living
Here's What the "Fittest Woman on Earth" Eats in a Day (Spoiler: It's a LOT of Carbs!)
by Jenny Sugar 1 hour ago

Healthy Living
From Pies to Muffins to Smoothies, These Vegan Pumpkin Recipes Are Packed With Protein
by Jenny Sugar 4 hours ago

Healthy Living
How Effective Are Blue Light Glasses in Combatting Headaches? Experts Weigh In
by Lesley Chen 8 hours ago