Carbs are public enemy No. 1 for many women on a diet. As much as we love pasta, bread, and every sweet you can think of, too many of us have been brainwashed into thinking carbs will make us fat. 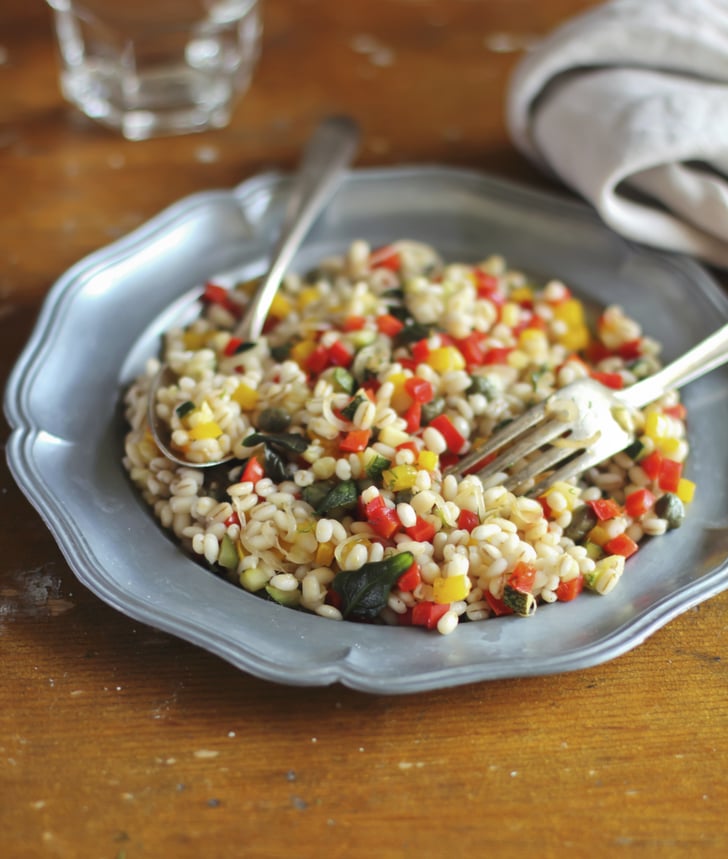 You need carbs for energy, and of course, deprivation will only end in you diving face-first into a gallon of Moose Tracks — and that certainly won't help you lose weight. What will is eating the right carbs, says Lyssie Lakatos, RD, one half of the Nutrition Twins with her sister Tammy Lakatos Shames, RD. She recommends consuming nutrient-dense carbs with at least two to three grams of fiber per 100 calories since your body breaks down fiber more slowly, keeping you feeling full for longer.

No need to read every nutrition panel, though. Incorporate these nine tasty foods into your meals, and you'll flatten your stomach and stay fueled all day.

Swedish research suggests barley can fight hunger by raising blood sugar levels more slowly than, say, a doughnut, helping you bypass the sugar spike — and crash — that leaves you famished. Pearled barley is popular, but barley groats or whole hull-less barley contain even more healthy nutrients, including 20 to 25 percent of your daily fiber in just one serving.

A half cup of peas provides 12 percent of your recommended daily intake of zinc. More known for its cold-fighting powers, this mineral may also help reduce hunger by boosting levels of leptin, a hormone that alerts your brain when your stomach has had enough.

A British study showed that a higher intake of whole grains — around three servings daily — was associated with a lower BMI and less abdominal fat, supporting other research that links a diet high in whole grains with tinier waists. It's key, however, to keep noodle portions between 100 and 200 calories (about 1/2 to one cup cooked), says Keri Gans, RD, author of The Small Change Diet, adding that nutrient-rich carbohydrates, are part of a balanced meal, not the entire meal.

When it comes to Winter squash, acorn squash just about knocks out the others for the "most fiber" award. Only hubbard has one more gram per cup — and good luck finding that in most supermarkets.

See which other carbs help you lose weight after the break!

You don't have to bid adieu to sandwiches, french toast, and stuffing to whittle down — as long as you read bread labels since packages touting "whole grain" or "whole wheat" may only be 51 percent whole grains. Only buy loaves with "100 percent whole wheat" on the package, Lakatos says, and with 80 to 90 calories, at least two grams of fiber, and less than one gram of sugars per slice.

Bean eaters have a 23 percent lower risk of an expanding waistline and a 22 percent reduced risk of being obese, according to research in The Journal of the American College of Nutrition. While each type of bean has slightly different amounts of fiber, all are good choices since they also pack protein and iron. Just remember to rinse any canned beans to reduce the sodium content, Lakatos Shames says.

When you're craving a salty snack, reach for popcorn instead of chips. According to a study in Nutrition Journal, popcorn not only provides more short-term satiety compared to the fried taters, it also reduces feelings of hunger for those looking to manage body weight and watch their calories. Plus you can nosh three cups of air-popped kernels — which counts as a serving of whole grains — for the same amount of calories you'd get from about nine plain potato chips.

Half of the fiber in oatmeal is soluble fiber, the kind that dissolves into a gel-like substance that delays stomach emptying, upping the satiety factor. Plus a study in the journal Obesity found that adding more soluble fiber to your diet may help reduce visceral fat, the deep belly kind that surrounds vital organs and has been associated with metabolic disorders, cardiovascular disease, and diabetes.

A complete protein, quinoa contains all nine essential amino acids — which your body needs to build lean, calorie-burning muscle — sans the saturated fats often found in animal protein. The four grams per half-cup serving may also help your lunch or dinner stay with you longer.

Healthy Eating Tips
Save Your Money! This Dietitian on TikTok Tells Us to Stop Buying These 3 Viral Supplements
by Angelica Wilson 17 hours ago