If you want to burn major calories but you don't have hours to spend in the gym each week, you may want to try Tabata, a form of high-intensity interval training named for Japanese scientist Izumi Tabata, who first studied it in 1996. In Tabata, "the goal is to keep the heart rate up for the duration of the workout," Alex Carneiro, an ACSM-certified personal trainer in Denver, CO, told POPSUGAR. You'll go as hard as you can for 20 seconds, then rest for 10 seconds, for a total of eight rounds.

Alex explained that you can do any cardio or strength-training exercise you want in Tabata (think: squats, burpees, push-ups, or deadlifts), but he noted that compound exercises — multijoint movements that work groups of large muscles — will help you achieve the best results.

While working out hard for 20 seconds at a time may seem simple enough, make no mistake that this style of training is physically demanding, and you don't want to go into your first Tabata workout or class unprepared. Here's what you should know before getting started.

Related:
This 4-Minute High-Intensity Abs Workout Will Leave Your Core Throbbing — and Shredded

How Many Calories Does Tabata Burn?

In other words, is it worth the effort? While calorie burn varies from person to person, depending on a number of factors, the answer is a resounding yes. A small study conducted by ACE found that a person can burn up to 18 calories per minute during a Tabata session. The average participant burned 15 calories per minute.

"That doesn't take into account the calories burned due to the 'afterburn effect,'" Kyle Prescott, an NSCA-certified strength and conditioning specialist and group exercise instructor in Philadelphia, told POPSUGAR. He explained that this phenomenon occurs as your body recovers from a workout. You increase your oxygen intake during this period, burning calories in the process.

In total, the ACE-funded study found that people can burn anywhere between 240 and 360 calories during a 20-minute Tabata workout — but for a more personalized estimate, use a fitness tracker.

Related:
Want to Torch Calories at Home? Try a HIIT Workout From One of These Top-Rated Apps

What You Should Know Before Starting Tabata

Both trainers emphasized that Tabata is tough — so if you're new to working out, you should probably work to improve your endurance before trying it. "If you're not willing to give near maximum effort for that 20 seconds, then you won't elicit the many benefits that [Tabata] produces," Kyle said.

Once you feel ready to give it a shot, Kyle recommends easing in, rather than signing up for five classes in a week right off the bat. "Tabata training is very taxing on your body, as you're expected to continuously put up 100 percent effort, and some people just aren't physically prepared for that," he explained. Try taking no more than two classes per week at the beginning and three per week after you've done the workout for some time.

Alex told POPSUGAR that staying hydrated before, during, and after a Tabata workout is a must. He said it's also important to understand that your heart rate will be up throughout the entire session, so you should make sure you're working at your own pace. "If you have to skip a round to catch your breath, that's OK," Alex said. "A proper warmup and cooldown is a must as well, as you want to avoid any potential injuries."

Workouts
Amber Says Fitness Builds Self-Compassion: "I'm Learning to Love My Body Instead of Hating It"
by Jenny Sugar 2 days ago

Under Armour
The 10 Best Under Armour Leggings For Leg Day, Rest Day, and Every Day
by Kalea Martin 3 days ago 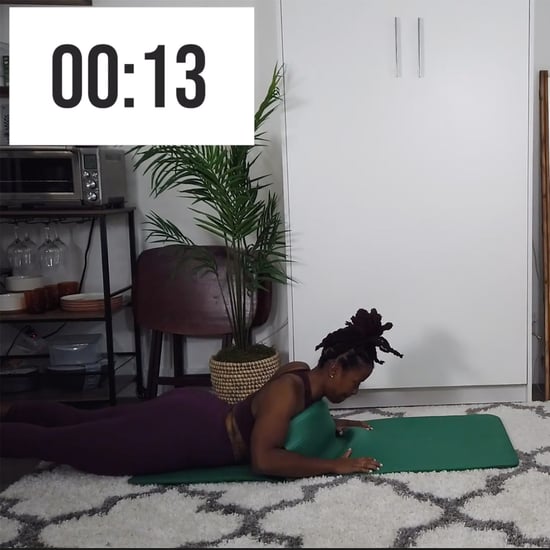 Workouts
This 20-Minute Upper-Body Workout Includes the "Rug Pull," and It's Intense!
by Jenny Sugar 3 days ago