Whether you're in need of a hearty breakfast or you could use an afternoon snack, smoothies are a great — and tasty! — way to get some nutrition in your body, stat. Just when you thought you've had every possible combination of smoothie ingredients, we're here to tell you that you're probably missing out on one particular ingredient that could be a total game changer in your weight-loss journey: sweet potato.

Not only is it the perfect time of year to break out sweet potatoes every chance you get, but they're packed with lots of nutritional value, which can help you shed those last few pounds and feel healthier overall.

One serving of sweet potatoes gives you 24 percent of your recommended daily intake of fiber (that will keep you fuller for longer), and they contain a compound that naturally increases the levels of a blood-sugar-regulating hormone called adiponectin. Their glycemic index rating is 50, which is quite low, meaning your blood sugar won't spike after you eat one and you won't get those crazy sugar cravings later on.

ADVERTISEMENT
Related:
Calling All Fall-Lovers: Pumpkin Can Help You Lose Weight — Here's How

Additionally, these potatoes have a natural sweetness to them (they're not called sour potatoes, after all), which will answer any hankerings you may have for sugary foods. That's also why they taste so great in smoothies — they add an extra layer of goodness that allows you to leave out any other sweeteners, whether it's honey, maple syrup, or almond milk that contains sugar.

I've been adding a roasted sweet potato to my smoothie every morning for the past two weeks, and I've noticed that I'm a lot less hungry in the late morning. My stomach used to start rumbling around 11 a.m., but now I'm full all the way until lunch. Plus, because I lift weights in the morning, I can count on my sweet potato smoothies to help me recover and give me extra energy. I owe it all to those complex carbs.

On Sunday evenings, I take several sweet potatoes, poke a few holes into them with a fork, and toss them in the oven at 450ºF for about an hour. Then I let them cool and simply put them in Tupperware in the fridge. The next morning, I take one out and just toss it in the blender with the rest of my smoothie ingredients; I don't even take the skin off (that's where most of the fiber lives, anyway). I repeat this every morning until I run out. Of course, you can boil your sweet potatoes if you want, but I love roasting them because it gives a special smoky flavor that is positively addictive.

If you're skeptical about this smoothie ingredient, try these recipes. They'll quickly turn you into a believer.

Healthy Living
The Stimulus Bill Allows Pretax Spending on Period Products, and It's About Time
by Corinne Sullivan 1 day ago

Healthy Living
If Your Apartment Roommate Has Coronavirus Symptoms, Here's What a Doctor Says to Do
by Maggie Ryan 1 day ago 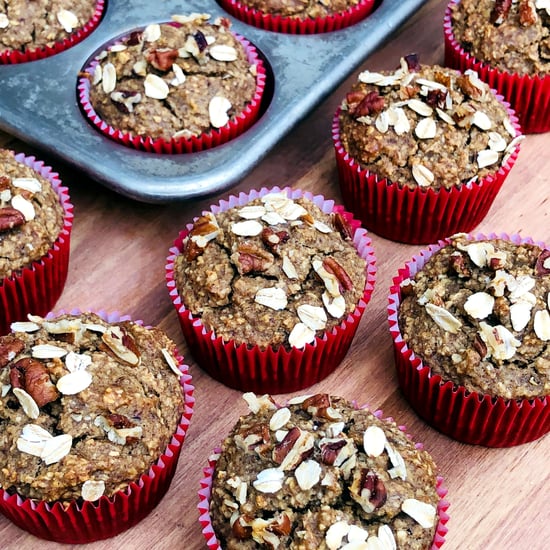 Healthy Living
In a Baking Mood? These Gluten-Free Banana Nut Muffins Have 6.7 Grams of Satiating Protein
by Jenny Sugar 1 day ago