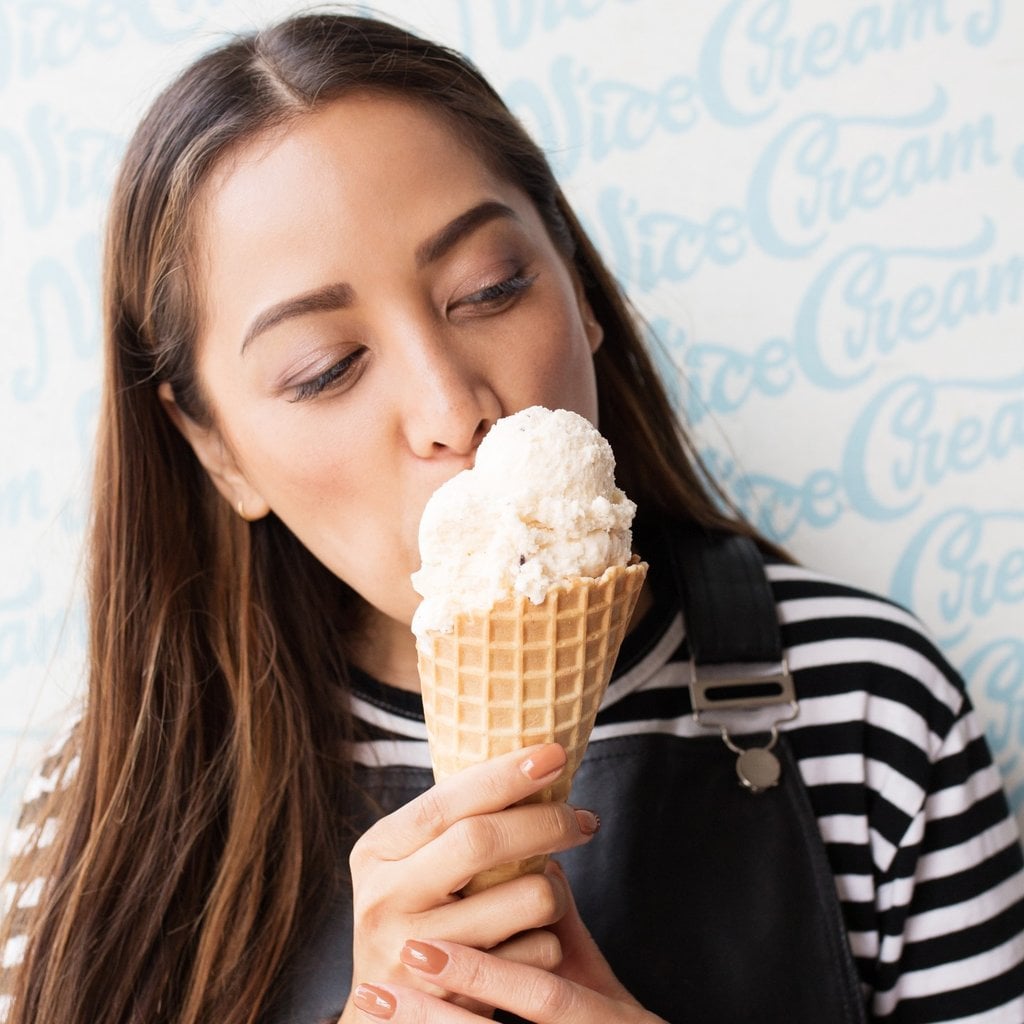 I'll admit I was intrigued when I first spotted the new low-calorie, high-protein ice creams next to my beloved Coconut Bliss and Häagen-Dazs at the grocery store a while back. Who wouldn't want to plow through an entire pint of ice cream for under 300 calories? Well, after giving it a try, this nutritionist is going right back to her high-fat, sugar-laden, calorie-rich ice cream with absolutely zero guilt, and I'll tell you why.

First off, let's take a look at the ingredients. Because they are not made with as much sugar or cream as traditional ice cream, these diet ice creams still have to get their flavor and texture from somewhere; that somewhere is sugar alcohols, natural flavors, added fibers, and thickeners. While these ingredients are not inherently bad, they can be problematic for some people.

Sugar alcohols are pretty popular right now because they are plant-based (unlike artificial sweeteners) and low-calorie. According to Chris Kresser, MS, LAc, these concentrated sweeteners can cause some pretty unpleasant digestive symptoms like gas, bloating, and diarrhea for certain people (mostly those who already have compromised digestion). Thickeners like guar gum and xanthan gum can have similar, ahem, undesirable results. While most people can consume these ingredients without any ill effects, it is something to keep in mind.

ADVERTISEMENT
Related:
Giving Up Dairy Changed My Body in So Many Surprising Ways

using the ingredients listed on the back of several of my favorite store-bought ice creams. I can't say the same for these new diet versions. I wouldn't even know where to find most of the ingredients, much less what to do with them if I did. Whole food is my jam and I will pretty much always choose simple, real ingredients over a mixture of ingredients that can only be manufactured by food scientists in a lab somewhere.

And as for the giant calorie count printed on the front of most of the low-cal ice cream packages, to me it just continues to fuel the notion that fewer calories = healthier. Ice cream is meant to be an occasional treat, and unless you are eating it for breakfast every morning, those few extra calories aren't going to have any lasting impact on your health goals.

I truly believe that when we eat the real deal, we get much more enjoyment out of it than when we try to satisfy our cravings with low-calorie substitutes. So pass me a bowl, a spoon, and a pint — all this ice cream talk is making me hungry.

Healthy Living
This Weighted Blanket Is Heated, and OMG, Where'd My Stress Go?
by Jenny Sugar 7 hours ago

Product Reviews
The Quest to Fit My Small-Band, Large-Cup Breasts: A 3-Week, 35-Bralette Journey
by Morgan Ashley Parker 8 hours ago