Over the weekend I took a bike ride down an especially scenic path next to the San Francisco Bay and during the ride saw a guy on Rollerblades whiz by, twice. I am the proud owner of a pair of in-line skates, purchased in 1999 and, sadly, in storage since 2003. Does anyone Rollerblade any more? 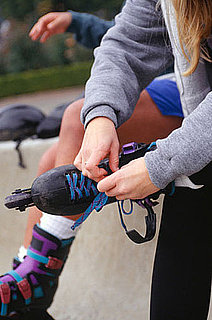 In-line skates were developed as a substitute for ice skates for a Russian speed skater training for the 1980 Olympics. Rollerblades as a brand were developed in the '80s and rocketed to popularity among athletes and scenesters alike. I purchased a pair in the late '90s to keep up with a street-hockey-playing boyfriend, and took my skates for a spin many times, both for exercise and enjoyment alike! Anyone who's hauled it up a steep hill will tell you the workout is incredible — you can burn up to 370 calories in 30 minutes — and anyone who's drifted down that same hill can recall the exhilarating rush of the wind in your face.

So what happened to Rollerblades? They're still for sale at a number of retail outlets, but I haven't seen many pairs in the wild lately. Honestly, they seem a little fad-y to me; I'd sooner lace up a pair of vintage roller skates than snap on my outdated in-lines. Were you a blader? Are you a blader? Do you think Rollerblades deserve a second chance like these other sports?

Fitness Gear
Athleta Is Having a Major Sale For Black Friday, Starting NOW!
by Nneya Richards 1 day ago