When it comes to saving energy when cycling, two riders are better than one. That's because the pair can draft, a technique that puts aerodynamics to work. The two cyclists ride in a tight single file line, with the back rider taking advantage of the slipstream created by the front rider. Essentially, the front rider cuts through the wind, decreasing the wind resistance of the second cyclist, who saves a significant amount of energy — estimated to be as high as 40 percent. The front rider will experience a slight push from the second rider as well. Drafting is an important tactic in bike racing. Teams use it to save energy and rotate in and out of the lead position. The single file line of two or more cyclists is referred to as a paceline. This is also a technique used to propel a rider to the finish line, allowing the back rider to draft and save energy before jumping to the lead and sprinting to the finish.

To properly draft in a headwind, cyclists must ride with mere inches between their wheels. In a crosswind, cyclists will form an echelon, a staggered diagonal line with each rider slightly downwind of the previous rider. 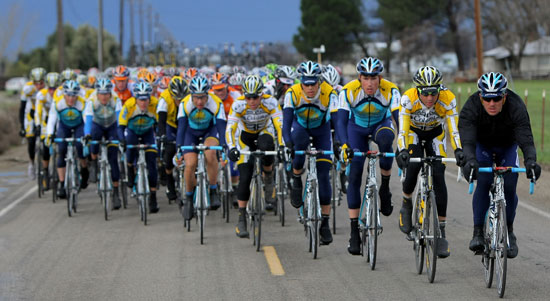