I am fascinated by the extremes athletes in training put themselves through, especially when it comes to their diets. Swimmer Michael Phelps eats about 12,000 calories a day when training, and extreme marathoner Dean Karnazes eats 7,000 calories a day when running. It sounds a little crazy, but given how hard their bodies are working, it makes sense that they'd need more fuel than the rest of us. 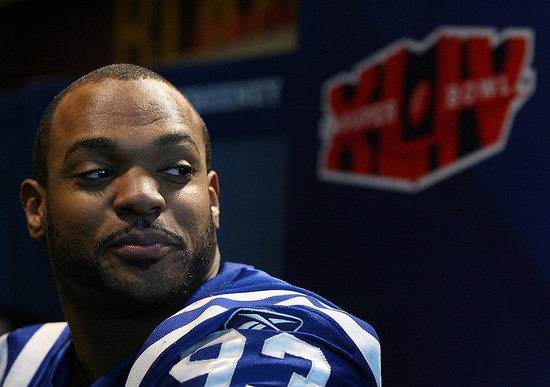 On the other side of the spectrum is Dwight Freeney, defensive end for the Indianapolis Colts. Freeney is playing in the Super Bowl this Sunday and is also featured in the February issue of Sports Illustrated. Reading the article, Freeney sounds a bit compulsive, a bit geeky, and totally obsessive when it comes to his training and diet. He uses all sorts of gadgets to repair himself: laser beams that he shoots into sore muscles, a posture pump to even out his spine, and an ARP machine that sends electrical currents into his nervous system, which helps his body heal faster.

"His diet makes supermodels look indulgent. From the Wednesday morning before the [AFC championship] game to kickoff that Sunday afternoon he ate beef and pinto beans and nothing else, not even for breakfast. He drinks only grape juice, water and occasionally tea as a treat. If he goes to a restaurant he brings his ingredients with him and instructs the chef on how he wants it prepared — no oil, no pepper, no garlic, no garnish, no powder and certainly no pan spray."

Freeney follows Sari Mellman's Progression Diet, a meal plan that is so exact it's based on blood analysis. Freeney's blood is looked at to determine what foods "maximize his inflammatory response and increase cellular function." The idea is that it's not so much a diet, as figuring out what food will make your body stronger, faster, and healthier. For Freeney, it's chicken over pork and Fuji apples over Granny Smiths. To keep it all in line, Freeney keeps an entire binder in his kitchen of what he can and cannot eat.

Crazy? A little bit. But I've read about many successful athletes who get there through drive, talent, and total rigidness. Keeping that in perspective, he doesn't seem too off-base. Now to see if his 21st-century approach can triumph over the Saints this Sunday . . .