A post shared by Eddie hall - The Beast (@eddiehallwsm)

Eddie Hall is the third strongest man in the entire world, but after shocking us with his beyond-impressive lifting videos, we're left wondering who could possibly be stronger than him?! The 28-year-old self-proclaimed "Beast" recently posted the video above, bench pressing two people (which appears to be between 300 and 400 pounds), but apparently that's nothing. Eddie's Instagram bio rightfully boasts that he holds the world record for heaviest weight ever deadlifted at 500KG (over 1100 pounds). Not only does Eddie so kindly re-rack his weights, but the fact that he's able to handle the unbalanced humans is unlike anything we've ever seen before. We hope they weren't his spotters! 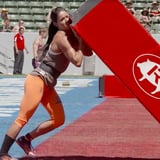 Workouts
Got Half an Hour? Try This Fat-Burning, Lower-Body Dumbbell Workout
by Samantha Brodsky 2 days ago

Workouts
Want to Feel Sore Tomorrow? This 45-Minute AMRAP Workout Has Your Name All Over It
by Maggie Ryan 4 days ago