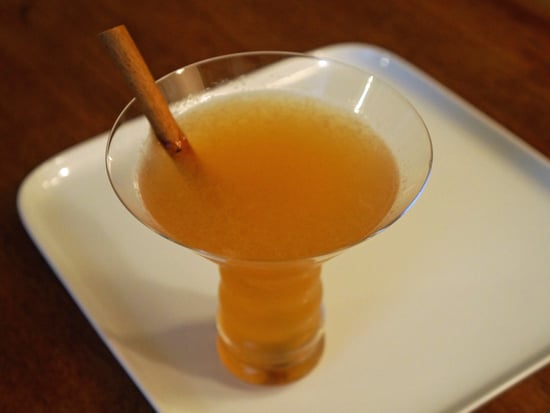 It couldn't be more fitting that Fergie has joined forces with Voli Light vodkas. The popstar is known for her healthy ways, and Voli's line of vodkas contain one-third fewer calories than traditional spirits on the market. When I first saw the recipe for Fergie's Fall Affair, I knew I had to give it a try.

The Fall Affair does not disappoint, especially considering it's only 125 calories and contains no added sugar. It's a nice balance of sweet and tart, with a spicy kick from the cinnamon. And though it's a light vodka, the alcohol stands up in the drink. With the flavors of apple and cinnamon mingling in this cocktail, it's a recipe to have on hand during any upcoming holiday parties!

In a cocktail shaker, combine the vodka, lemon juice, apple cider, bitters, cinnamon, and ice. Shake, then strain into a martini glass; garnish with cinnamon.

Healthy Living
Looking For the Perfect Jalapeño Marg? Try This Low-Sugar Recipe That's Only 200 Calories.
by Christina Stiehl 5 hours ago