We are pumped to share one of our fave stories from Self here on FitSugar! 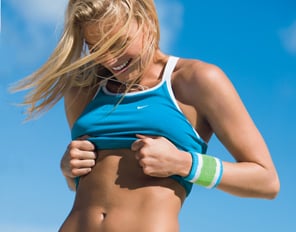 We're not going to lie: transforming your body from head to toe isn't always the fastest process, because it takes time to burn fat and build muscle. However, there is an exception: With the right diet and workout, you can see a difference in your belly (and maybe even reveal an ab or two!) in just a couple of days. The secret? Beat bloat.

Generally, the best way to avoid bloat is to stay away from soda, alcohol and greasy, salty, fatty meals, which slow the stomach and the intestines from emptying, according to Timothy S. Harlan (a.k.a. Dr. Gourmet), M.D., medical director of Tulane University's School of Medicine.

Here are 5 of our favorite bloat-busting foods, and a few moves to add to your belly-shrinking workout routine.

More foods to decrease the bloat, so keep reading.

Bonus: At the gym, incorporate these tone-up quick moves (especially the killer Plank Rows!). What's your secret for winning the battle against bloat?

More from Self:
Yoga For Your Abs
Flat-Belly Foods: 20 Superfoods for Weight Loss

Food Shopping
Jeni's Dropped a Bunch of Breakfast-Themed Sweet Treats, Including Everything Bagel Ice Cream
by Karenna Meredith 6 hours ago