During Madonna's Super Bowl halftime show, a performer jumping up and down on what appeared to be a tightrope had the crowd asking, "Who is that guy who looks like Will Ferrell, and what is he doing?" For anyone involved in rock climbing, you already know that it's athlete "Sketchy" Andy Lewis, the slackline king. 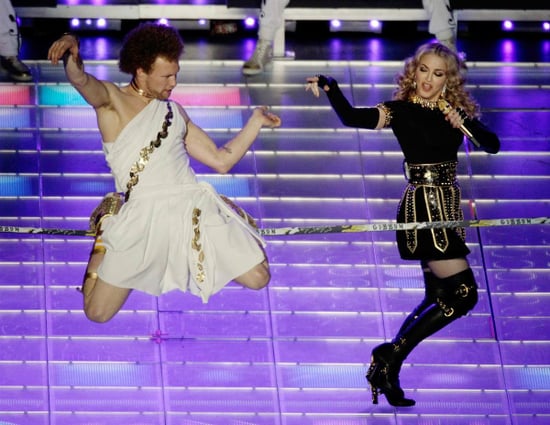 Besides being a lot of fun, slacklining is an incredible workout that challenges your core, agility, and balance. It may look similar to tightrope walking, but the differences are important. Unlike a tightrope, which uses a tautly-held rigid line, slacklining relies on the use of flat nylon webbing anchored with enough give to stretch and bounce. This give is what allowed Andy, who holds several world records in slacklining, to perform those acrobatic stunts during the halftime show. While it's grown into having a community all its own, modern-day slacklining is attributed to the Yosemite rock climbing community. In the '80s, rock climbers started killing time while camping by setting up slacklines using gear they already had — a tradition which still persists today. Some climbers even go slacklining thousands of feet up above the Yosemite valley floor. Slacklining has since evolved into a competitive sport and even bred offshoots like yoga slacklining.

If you missed Andy's performance, check it out after the break!

With a variety of slackline kits now available for purchase (here's the Gibson slackline that Andy used during the halftime show), it's a sport almost anyone can try.