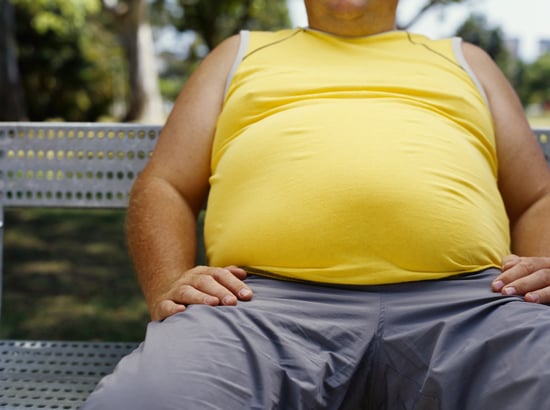 Love conquers all, or so the saying goes. But for some men, love isn't enough to overlook weight gain. In AskMen's Great Male Survey of 2011 nearly half of the 70,000 men surveyed said they would "dump a girlfriend if she became fat." While a small majority (53 percent) of men surveyed said they would stick next to their woman's side if she jumped a few dress sizes, the poll results are still surprising. By comparison, only 20 percent of women said they would leave their man if he gained weight — maybe size really doesn't matter after all!

Keep in mind that the AskMen survey was particularly general; it didn't go into what "fat" really meant or ask if these men would try to motivate their partner to get active before dumping her. There was also no indication of whether their decision to dump was purely shallow or if they worried that their girlfriend being fat spoke to a larger emotional issue. Also, would these dudes hold themselves to the same standard? Regardless, this stat is sure to ruffle more than a few feathers.

Gaining weight can be an unwelcome symptom of being in a relationship — dinners out, extra couch time, and less time to exercise are all reasons why it happens. But is it a good enough reason to dump someone?

Love
Are You Self-Gaslighting? 5 Ways You Might Be Sabotaging Your Greatness, and How to Unlearn It
by Brittany Beringer-Tobing 12 hours ago

Healthy Living
With 6 Months Until the Paralympic Games, These Are the Athletes We Are Excited to Watch
by Christina Stiehl 2 days ago

lululemon
Orangetheory Released a Lululemon Apparel Collection, and Yes, There Are Leggings
by Maggie Ryan 3 days ago

Healthy Living
Black Olympic Athletes Reveal What Brings Them Joy, and It's Not Always a Gold Medal
by Christina Stiehl 3 days ago