If all the mixed messages about soy products have you confused, you're not alone. Recent studies have certainly found mixed evidence on the benefits. I've been hearing mostly about soy's effect on heart disease and breast cancer, so here's the latest research on the topic. 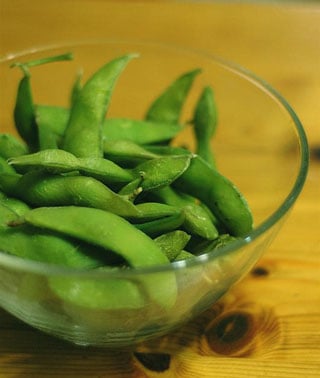 Heart Disease
A recent comprehensive update of soy research by the American Heart Association's nutrition committee found that soy protein does not have as much of an effect on cholesterol as previously thought. The benefit for the heart is not due to a direct relationship to reduced cholesterol but rather because soy products are generally used as a substitute for unhealthy choices and also because they are low fat yet high in fiber, vitamins, and minerals.

Breast Cancer
Soy products contain a wide range of compounds including isoflavones, which can act as antioxidants, but also function as phytoestrogens. Phytoestrogens are chemicals that plants make that are similar to human estrogen, and many of us have read that these phytoestrogens have been linked to breast cancer. In some cases these phytoestrogens may be able to mimic estrogen in the body or block the action of estrogen. Phytoestrogens acting as estrogen could possibly affect cell communication, prevent the formation of tumors, or change the way DNA is processed in cell multiplication.

For more on the relationship between soy and breast cancer, keep reading.

Studies so far have provided conflicting results on soy and breast cancer, some showing a small association between soy consumption and reduced breast cancer while others show that concentrated supplements of soy proteins may cause breast cancer cell growth. However, the timing of intake and type of soy being consumed may make a difference: a recent comprehensive study of Chinese women found that those who consumed more than 15 grams of soy a day throughout adolescence and early adulthood had nearly a 60 percent lower risk of premenopausal breast cancer than women with the lowest intakes. It’s important to note that Asian diets consist of mostly whole and fermented soy products such as edamame, tempeh, and tofu, whereas Americans tend to eat more processed soy foods such as soy yogurt, soy cheese, and soy "meat" products that contain fewer isoflavones and other beneficial components.

I recently caught up with integrative medicine guru Dr. Andrew Weil to chat about PMS-busting recipes including Shiitake Tofu Lettuce Cups, and here's what he had to say about soy: "I am a strong proponent of eating whole soy foods moderately and regularly. Soy whole foods are tofu, tempeh, edamame, soy nuts, soy milk. It not only protects against breast cancer in women and prostate cancer in men but is good for general health and specifically can help prevent PMS symptoms and ease menopausal symptoms. I think soy foods can be very helpful because of phytoestrogens they contain, which help balance a woman's hormones."

Bottom Line
Research relating animal and dairy protein high in saturated fat to heart disease and cancer is far stronger than any research connecting soy to major health issues. The jury is still out on whether soy should be consumed in large amounts for prevention, but based on the research, it's most likely safe, and even probably helpful, to eat high-quality soy foods in moderation as part of a balanced healthy diet unless advised otherwise by your health care practitioner.

Healthy Living
If You Have Diarrhea, Abdominal Cramps, and a Fever, It Could Be a Salmonella Infection
by Christina Stiehl 3 days ago

Healthy Living
On Birth Control? Here's What to Do If Your Period Starts Before You Reach the Placebo Pills
by Emily Weaver 4 days ago

Halloween
Applebee's Is Putting the "Boo" in Boozy With Two New $5 Halloween Cocktails!
by Haley Lyndes 4 days ago