If you're too embarrassed to consult your friends about the concerning changes to your vaginal discharge, check out what our friends at Self want you to know before calling up your ob-gyn in a panic. 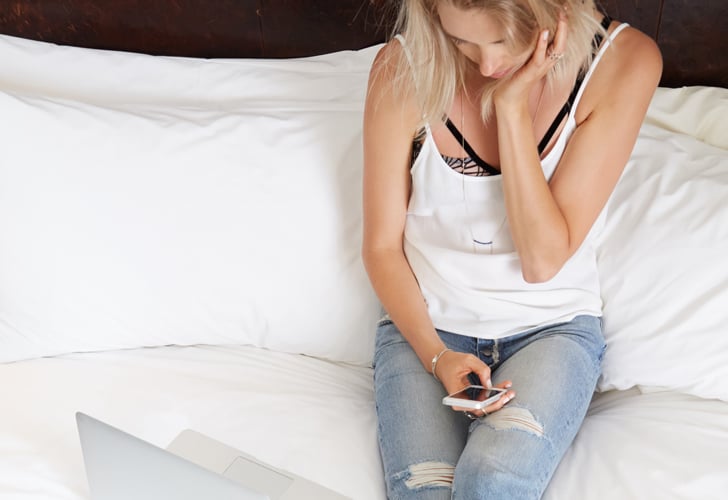 If you have a vagina, you've probably spent a decent amount of time wondering if what's coming out of it is normal. But bringing up your vaginal discharge and asking your friends if theirs looks and smells the same isn't typically accepted happy hour chitchat.

Concern about discharge is "the number one reason why women go to the gyno," Michael Cackovic, M.D., an ob-gyn at Ohio State Wexner Medical Center, tells Self. When you're concerned about unexplained changes in your body, it's always a smart idea to check in with your doctor to find out what's up. But when it comes to discharge, what's "normal" varies greatly, depending on all sorts of things — even your stress levels or the foods you eat.

So how do you know if your discharge is a sign something's off kilter? Here, Cackovic explains what typical discharge should look like, and what colors, smells, and textures should raise a red flag.

"Normal is about a teaspoon every 24 hours," Cackovic says. "It can be white, transparent, thick, thin, mostly odorless, but there may be a slight odor," he adds. A faint odor is simply from the cells of the cervix and vagina that have sloughed off and are being dispelled. Discharge can also turn slightly yellow when it interacts with the air, according to the US National Library of Medicine.

But what's normal can change quite a bit depending on an array of different things. "Pregnancy, use of contraceptive pills, even things like sexual activity and your diet can affect different characteristics of discharge," Cackovic says. Discharge can look different at various points in your mentrual cycle, too, thanks to different hormonal changes during ovulation. This is why women who use the rhythm method, or natural family planning, monitor their discharge closely, among other things. Even stress can alter how much discharge you have.

For women who are menopausal or postmenopausal, it's not uncommon to have more or less discharge than normal because of the changes in estrogen levels.

How can I know when something's wrong?

The vagina is a carefully balanced ecosystem, with between 10 and 20 types of bacteria that live in perfect harmony. "The environment is maintained to be slightly acidic by the majority of bacteria, lactobacillus," Cackovic explains. "Anything that changes that, even wearing a wet bathing suit or just being sweaty and wet down there" can throw off the natural balance. For some women, seemingly innocent things like changing your laundry detergent or using new bath products that change the pH of your vagina can be enough to cause an infection.

When the delicate balance gets thrown off, one type of bacteria or yeast has the opportunity to overgrow, or a foreign bacteria introduced into the mix multiplies, and you end up with a really uncomfortable infection, which can lead to changes in discharge. Small changes in discharge quantity, color, and even smell can be completely benign, but any drastic difference, or if it's coupled with itching, pain, burning, or bleeding (which can make discharge look brown), is a sign something's not right — and you should get in to see your gyno ASAP.

Bacterial vaginosis, an overgrowth of native bacteria in the vagina, typically turns discharge gray and fishy smelling. The STIs chlamydia, gonorrhea, and trichomoniasis can also affect discharge. These infections tend to make it smelly and a yellow-green color. This can be one of the early signs of infection — the itching and burning typically won't start until after the infection gets bad, Cackovic says.

A yeast infection, caused by an overgrowth of a type of yeast called candida that naturally lives in your vagina, can produce thick discharge that resembles cottage cheese. Yeast infections commonly occur when the vagina is extra moist, from things like sweat or sitting all day in a wet bathing suit. "It basically changes the environment and makes it more susceptible to yeast," Cackovic explains, so the yeast that normally lives there overpopulates.

If you have signs of an infection, refrain from self-treating, and go visit your gyno.

Cackovic cautions against self-diagnosing and running to CVS to treat your symptoms. If you're treating the wrong thing, it will throw things even more out of whack and create a vicious cycle of infection.

After determining what's causing the funky discharge and irritation, your doctor can direct you toward the right treatment, whether it's a pill or cream. If your infection is caused by bacteria, Cackovic notes that you should expect to be symptom-free about 72 hours after being on antibiotics. If it's caused by a fungus (yeast is a fungus), the typical course of treatment is using an antifungal medicated cream for three to five days.

"You definitely should see your doctor if there's a change [in discharge] and you want to make sure," he says. "If something's really going on, it requires a doctor who can take a look and come up with a plan." The last thing you want is to suffer through an itchy, painful infection longer than necessary.