If you ever wondered why the cast of Black Swan has such amazing bodies, the arabesque may be the answer to your question. This traditional ballet extension works the entire backside, acting as the engine to power the leg into the air. Many barre studios took note of the effect arabesque had on bums and followed suit by adding it to their daily repertoire. Even some yogis can be found taking a pose in this parallel position. Here's how to make the arabesque part of your fitness routine so you'll be rocking that ballet booty in no time! 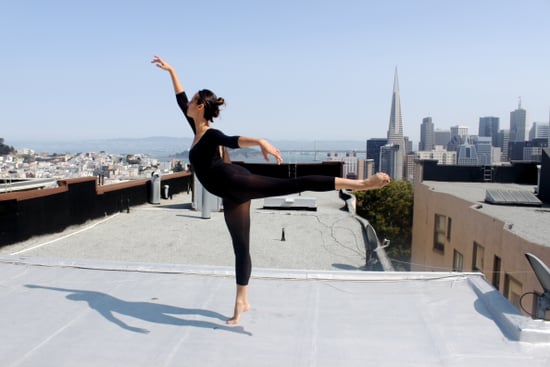 Start by walking your body away from a chair or barre until your arms are straight and your chest is parallel to the floor.

Learn how to do the move (and a more challenging variation) after the break!

Take a bend in both of your knees and as you extend one of your legs straight behind you, tuck your hips down. Although this move was inspired by ballet, the height is not as important as the tuck. Make sure your hips stay tilted down to get the maximum burn in your glutes.

Once your leg is suspended in the air, retuck your hips and slightly pulse your leg into the air for about 15-20 reps. You can also squeeze your lifted toes in toward your center body line. For that side dent in your seat, extend your leg out to a diagonal and lift from there for about 20 counts.

If you start to feel really strong in this position, try it without the barre. Walk away from the wall and take an arabesque in center. Your hands can float next to your hips or in prayer, with your palms pressed together.

Summer Olympics 2021
Team USA Divers Take Us on a Video Tour of Their Olympic Village Apartment — the View Is Unreal!
by Jenny Sugar 2 days ago

Summer Olympics 2021
Watch Gymnast Danusia Francis Live Out Her 11-Second Olympic Dream — All With a Torn ACL!
by Jenny Sugar 5 days ago