Is alcohol negatively affecting your eating habits? Take these expert tips from our friends at Health to keep your habits in check. 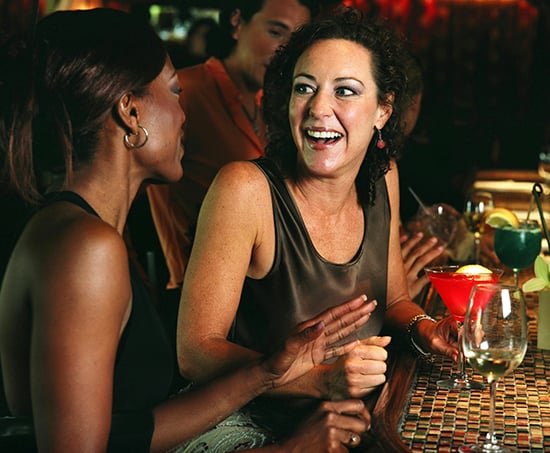 Over the years, many of my clients have confided that too many cocktails on the weekend, followed by alcohol-induced overeating, cancels out their work-week healthy eating efforts. And as a result, instead of seeing results, they remain "stuck" in a weight loss plateau. Sound familiar?

This trend is supported by a new UK survey, which found that in a single evening out on the town, 40 percent of women consume about 1,000 calories in alcohol alone. In addition, more than half say that imbibing makes them hungrier, and four in five admit that drinking diminishes their willpower, causing them to indulge in foods like burgers, pizza, and chips. If alcohol is your diet downfall, try putting these seven tips into action:

Eat before you drink
When your stomach is empty, alcohol is absorbed quickly, which means you'll feel the effects within minutes. But eating something rich in lean protein and/or good fat, which are both digested and absorbed slowly, creates a buffer. So to curtail your tipsiness, nibble on something like a golf ball-sized portion of nuts, or fresh guacamole with veggies before you take your first sip.

Count your drinks correctly
If you count one drink as one of what you're served, you may be greatly underestimating your intake. Technically, 12 oz of light beer (one bottle or can), 5 oz of red or white wine (a little smaller than a yogurt container), and one shot of liquor all pack about the same amount of alcohol, and each contains roughly 100 calories. But one study found that wine and liquor served at restaurants are about 40 percent larger than these standard drink portions. Another report, out last week, found that beer and wine contain higher alcohol levels these days, so when you order a drink out, you may be getting 50 percent more alcohol than you think. In addition, if you order a pint of beer (16 oz), you'll get four extra ounces than one standard drink, and then there are mixed drinks that contain more than one shot (like those illustrious Long Island Iced Teas!). The lesson: if you underestimate your intake, you may be far tipsier than you think. That means not only more alcohol calories than you counted on, but also a loosier goosier state of mind than may seriously affect your appetite.

Slim down your drink order
If you're a beer drinker, the type you order can have a big impact on your nutritional bottom line. A bottle or can of ultra low carb beer contains about three to four grams of carbs. But a regular version packs at least 10 grams, about as much as 10 mini pretzels. That means three a week adds up to an extra 1,560 grams of carb per year, the equivalent of nearly five loaves of bread. Drinks made with mixers are even bigger carb and calorie traps. Just four ounces (a half cup), of a sweetened mixer will cost you a whopping 25 grams of carbs (about 14 gummy bears worth), and decadent drinks like a mudslide can contain over 500 calories, more than the amount a slice of chocolate cake.

Slow your pace
One of the biggest culprits in alcohol-driven overeating is getting too tipsy, too fast. To slow down the rise in your blood alcohol level, order a tall glass of water with every alcoholic drink. Alternate sips, and be sure to finish at least 12 ounces of H2O for every cocktail. This simple strategy may cut your total consumption in half.

Prevent mindless munching
If you're at a bar with free happy hour apps, or one that serves up goodies, like popcorn or nuts, turn your back on the free fare, or place them out of arm's reach. Research shows you'll mindlessly munch if food is right in front of you, without even realizing it, and even if you aren't hungry. But if it's out of sight, you're much less likely to seek it out.

Pre-plan your post-drink meal
Alcohol can indeed act as an appetite stimulant. And we all know it lowers inhibitions. So if you don't want to give in to eating things you wouldn't touch if you were sober, create a pre-drinking strategy. Stash something in your bag, like an all natural energy bar, so you won't grab a greasy slice of pizza. Or scope out restaurants nearby where you're going out, so if your friends want to grab a bite, you can suggest a spot where you know you can order a healthier option. Finally, strategically place some light snacks within sight at home, like pre-popped organic popcorn on the countertop, or cut fruit and fresh veggies and hummus front and center in the fridge. If you get a case of the munchies before bed, you're much more likely to grab what's readily available, rather than digging for something like chips or cookies.

Volunteer to be the designated driver
The best way to prevent alcohol from derailing your diet is to avoid drinking altogether. One tactic is to save your group taxi or ride-sharing costs by offering to drive (stick with naturally calorie-free club sodas with lime all night). While it may not be as fun as indulging with your group, you're the one who'll wake up the next day without a food or alcohol hangover, and that feels pretty darn good.

Read More:
10 Reasons to Give Up Diet Soda
Sleep Is a Beautiful Thing
Which Internet Food Rumors Are True?