Whether you're celebrating Hanukkah tonight or not, potato latkes (also called potato pancakes) make a delicious meal. I've cooked up the standard potato latkes made with russet potatoes, ones with shredded carrots added, sweet potato and carrot latkes, and also ones made with zucchini from my garden. 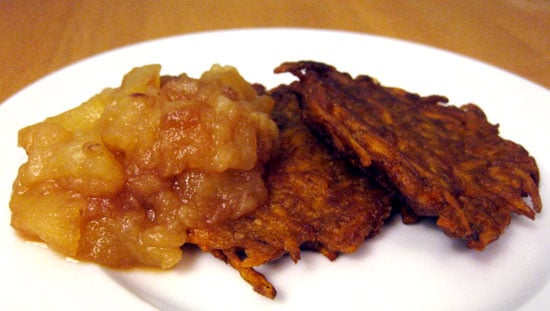 This year I am spicing things up a bit, and if you're ready to try a savory latke with a taste of India, give this recipe a try. They're made strictly with sweet potatoes, so they're naturally sweet and full of vitamin A. I whipped up some chunky homemade apple and pear sauce to enjoy with them, and I'll definitely be making these again. If you've never made latkes before, check out these tips from YumSugar, on how to make perfect latkes.

To see this recipe, continue reading.