Does it take you an extra 20 minutes at the grocery store because you're obsessed with reading labels? Even if you solely shop at health food stores, some foods may still contain processed or chemically laden ingredients. Read on to find out which terms you might want to pass on when you see them on a label. 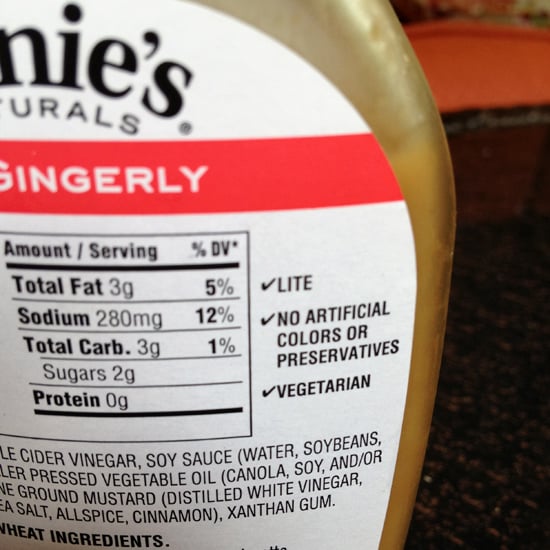 Xanthan Gum: A common thickening ingredient, xanthan gum is made by fermenting corn sugar with the Xanthomonas campestris bacterium (that's where it gets its name). Aside from being a thickener, xanthan gum is added to products as an emulsifier to help ingredients blend more effectively. While this ingredient is harmless for most, those with an allergy to corn should pass. Watch out for xanthan gum in salad dressings and sauces.

Carmine: If six-legged creepy crawlies freak you out, then this is one ingredient you'll want to skip. Carmine is a bright-red pigment that's obtained from female scaly insects such as the cochineal. It's used in food, artificial flowers, paints, makeup, and ink. Vegans, vegetarians, and those following a kosher or halal diet need to know that this ingredients is also called Crimson Lake, Cochineal, Natural Red 4, C.I. 75470, or E120.

Mono- and Diglycerides: These incomplete fats are common food additives used to blend ingredients together that don't naturally mix well, like oil and water — think processed peanut butter like Jif. Even though they're not-quite-whole fats, both really have no caloric impact, since they're added to foods in such tiny amounts. Just like hydrogenated oils, mono- and diglycerides increase the shelf life of foods, but according to the FDA, they are on the GRAS (Generally Recognized as Safe) list. Since these fatty food additives may come from an animal source (derived from a pig or cow), vegans and vegetarians will want to steer clear.

Keep on reading to learn what other ingredients you might want to avoid.

Malic Acid: Malic acid is a natural compound found in tart or sour foods. Aside from apples, it's also found in cherries, tomatoes, grapes, and wine and is used as an additive to give foods and candies a tart flavor. Sometimes malic acid is added along with citric acid to foods like Jolly Ranchers, SweeTarts, and salt-and-vinegar potato chips. It may also be added to dairy products, processed fruits, condensed milks, soups, beers, malt beverages, and processed meats. Be warned: if you eat too much, then it could irritate your mouth.

Modified Food Starch: This additive is used in foods to act as a thickener to acquire a certain texture or to keep foods moist. It's made by physically or chemically treated corn, so if you suffer from a corn allergy, then this is an ingredient you'll want to avoid. It can also be called modified food starch when made from wheat, potato, rice, or tapioca, so people with gluten allergies should avoid this ingredient unless a food containing it is labeled "gluten-free."

Soy Lecithin: This is food additive extracted from soybeans and is a by-product of soybean oil. It's often found in chocolate to keep the cocoa and cocoa butter from separating. Soy lecithin is actually high in choline, which is also found in egg yolks, and has been found to be good for brain development, increased memory, and heart disease prevention. Although soy lecithin isn't bad for you, those with soy allergies will want to watch out.