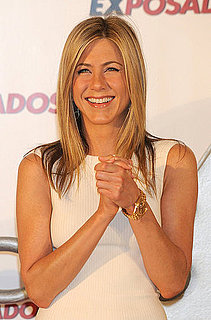 Last week the blogosphere went crazy with claims that Jennifer Aniston was put on a baby food diet by trainer Tracy Anderson to get in shape for her role in Just Go With It. And in an even stranger turn, it was being reported that Jen felt so insecure next to costar Brooklyn Decker that she flew her longtime trainer, Mandy Ingber, out to Hawaii to be with her on set. In what can only be described in "no duh" terms, it turns out that all of these claims are nothing but pure malarkey. When People asked Jen what was up with her baby food diet, she responded: "Sorry, but the last time I had baby food, I believe I was 1. I've been on solids for about 40 years now."

Adding to the heap is that People is reporting that Jen has never worked "directly" with trainer Tracy Anderson (despite Jen being listed as a client on Tracy's website) and that the actress finds the whole baby food thing to be nothing but "strange." As far as Jen's trainer being on set with her, that seems to be nothing but fluff too. Jen's spokesman, Stephen Huvane, told ABC News that yes, Jen works with Mandy year-round but "has not specifically flown her in to Hawaii after seeing Brooklyn Decker." Judging from Mandy's Twitter account, we'd have to agree — the yoga instructor has been in Southern California and NYC for the last few weeks.