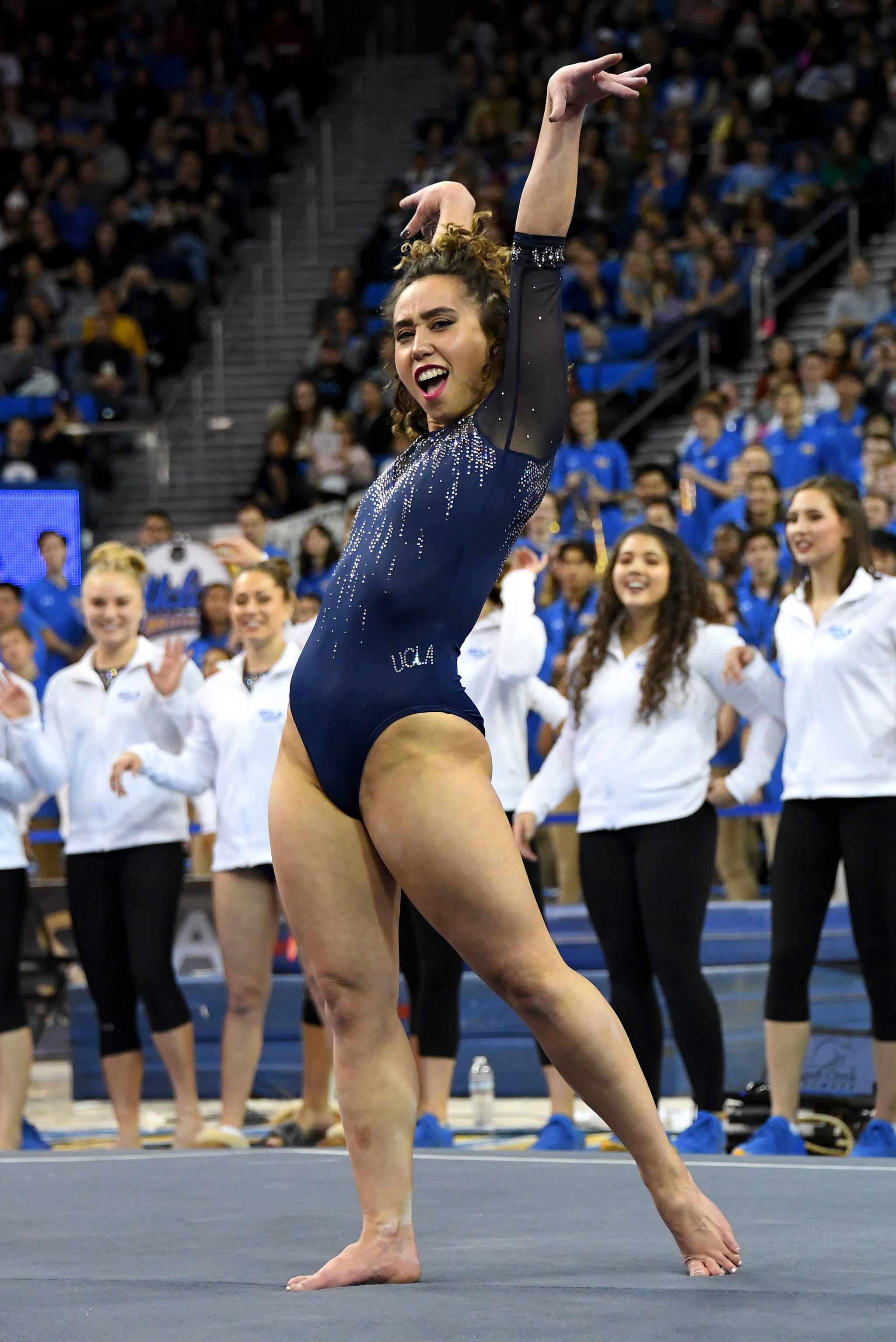 Katelyn Ohashi's relationship with gymnastics resembles an upside down bell curve. Doing the sport as a little girl made her feel like she was on top of the world, then her elite-level training brought that joy down to its lowest point. After breaking from the Olympic track and heading into her collegiate career, she finished her senior year at UCLA as one of the best college gymnasts in the nation on floor — with six perfect 10s and viral routines that have put smiles on millions of faces. She ended on top again.

Katelyn performed her very last routine for UCLA at the NCAA Gymnastics Championships this past weekend (the team came in third). She's reflected on social media and in interviews that UCLA, especially retiring head coach Valorie Kondos Field, played a crucial part in helping her rediscover her passion for gymnastics. Katelyn has also been very open about the mental strain and body image issues that resulted from years of training as an elite gymnast (she wrote on her website that she was told, at 13 years old and 70 pounds, that she'd "swallowed an elephant"). Now, in a new op-ed for NBC News, Katelyn goes into more detail about her journey to take back that joy.

On paper, Katelyn was doing everything right as an elite gymnast: she defeated Simone Biles to win the 2013 American Cup and was an Olympic hopeful. But, when she could no longer compete due to a back injury, she was relieved, revealing in this op-ed that the Olympics were never her goal. "As an athlete you learn to keep pushing through the pain until the pain eventually becomes unbearable," Katelyn wrote. "Even then, you are told to continue. I learned at a young age that my voice was not wanted or heard, so I went silent. I did what I was told and set goals based on what everyone else expected of me. This may sound shocking, but I never dreamed about going to the Olympics. It was just something people expected of me."

"I was encouraged to use my voice and explore my passions outside of the sport. And when I did that, I was finally able to realize my true self-worth."

Leaving the sport felt like "a weight was lifted from my shoulders," Katelyn wrote. But, she soon realized that she didn't know who she was without gymnastics. Two years after her American Cup win, she returned to compete as a level 10, then joined the UCLA team. Even still, finding that joy took time. "During my freshman year of college, it became undeniably clear that I didn't want to be great again," she admitted. "I correlated greatness with misery."

Katelyn continued on to write that the UCLA program provided her with the trust and love that she needed to reconnect with happiness. "Too frequently, we hear about coaches and programs willing to win at any cost. Miss Val puts the human before the athlete. I was encouraged to use my voice and explore my passions outside of the sport. And when I did that, I was finally able to realize my true self-worth. I was more than that of a gymnast."

Gymnastics, she wrote, no longer defined her, but she was able to find the joy she'd lost long ago. Katelyn also reflected that the sport itself is not cruel; rather, the culture is. Gymnastics allowed her "to grow and learn invaluable life lessons: sacrifice, dedication, discipline. Eventually, it [led] me to my voice." Read the full op-ed at nbcnews.com.